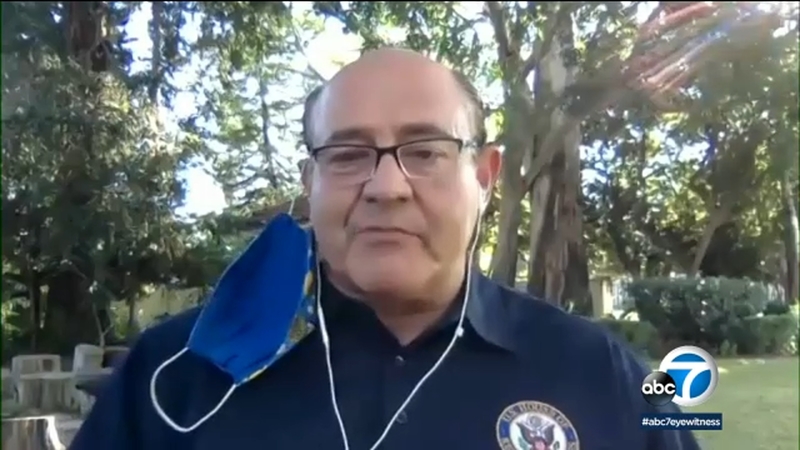 SANTA ANA, Calif. (KABC) -- An Orange County congressman contracted the coronavirus before he could get a second dose of the vaccine that would have improved his immunity.

Rep. Lou Correa, D-Santa Ana, announced in a tweet Saturday that he tested positive upon returning home from Washington, D.C. So far, he told Eyewitness News, he has only experienced mild symptoms.

"I will be responsible & self-quarantine, away from my family, for the recommended time," he said in the tweet.

The 62-year-old is the latest House member to report testing positive since dozens of lawmakers huddled together for protection during the Jan. 6 insurrection at the U.S. Capitol.

Correa did not shelter in a designated secure room with his colleagues during the violent siege, choosing instead to stay outside and assist Capitol Police, his office said.

The next day, Correa was being interviewed live by Eyewitness News when he was verbally accosted by a group of President Trump supporters, some not wearing masks, at Dulles International Airport in Virginia.

O.C. Rep. Lou Correa was on the House floor during the Capitol attack, and as he was explaining the chaotic scene live on Eyewitness News Thursday morning, an apparent Trump supporter began harassing him.

Meanwhile, the congressman has been helping Orange County with efforts to distribute the vaccine to residents.

"My neighbors, 25 to 30% infection in this area... I told the (Orange County health officer) I don't want to see any vaccinations in your refrigerators. I want to see you get them out, administer them, and I want you to scream at me and say 'Hey, there's a shortage of them.' I want to hear you say 'Lou, the federal government isn't giving those vaccines to us fast enough.' That's what I want to hear, but I want you to turn around and I want you to vaccinate as many people as possible."

Because of his diagnosis, Correa says he will not be able to attend the inauguration of President-elect Joe Biden on Jan. 20.