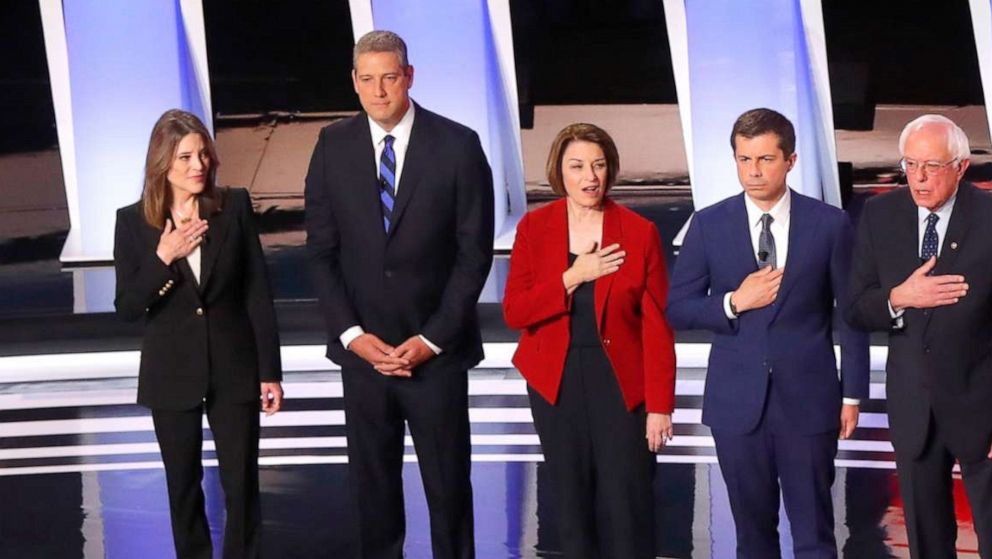 ABCNews
By ELLA TORRES
Rep. Tim Ryan, D-Ohio, caused a stir on Tuesday night before the Democratic Debate even began.

Ryan was the only one of the 10 candidates on stage in Detroit not to put his hand over his heart during the national anthem.

"The View" co-host Meghan McCain quickly pointed out the incident on Twitter.

"Put your hand over your heart for the star spangled banner Tim Ryan!!!" she wrote.

Ari Fleischer, former White House press secretary for George W. Bush, tweeted that Ryan, a Democrat, was "appealing to the Kaepernick wing of the Democratic Party."

Ryan responded to the criticism following the debate.

"I love this country as much as everybody else," he said.

A spokesman for Ryan told ABC News on Monday: "Congressman Ryan wasn't protesting and didn't mean to make any statement last night in Detroit, it was a moment of absentmindedness while on a debate stage that won't happen again. He was, in fact, singing along with the choir to honor our country. He loves our country and will continue to honor the flag during the anthem in future events, as he has in countless events in the past."

Colin Kaepernick, the former San Francisco 49ers quarterback, drew national attention in 2016 for kneeling during the national anthem to protest police brutality against people of color.

He has not been with an NFL team since the 2016 season.
Report a correction or typo
Related topics:
abc newsnational
Copyright © 2020 ABC News Internet Ventures.
More Videos
From CNN Newsource affiliates
TOP STORIES
33 current cases of coronavirus confirmed in Calif.