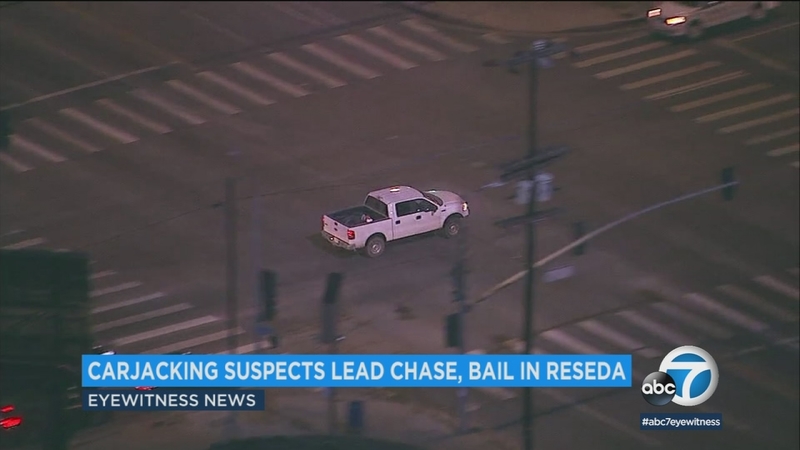 2 carjacking suspects in custody after chase ends in Reseda

RESEDA, Calif. (KABC) -- Two carjacking suspects who led authorities on a high-speed chase in Los Angeles County early Monday morning before bailing out in a Reseda neighborhood are in custody.

It all started at about 3 a.m. as an armed carjacking near South Oxnard Boulevard in Oxnard.

Police located the suspects in the truck in Van Nuys, where the pursuit began, authorities said. The driver sped through red lights on surface streets at speeds as high as 100 mph, at times traveling toward oncoming traffic for no apparent reason.

The chase blew through Van Nuys, Lake Balboa, Reseda, Northridge and back to Reseda.

"The way that they were driving demonstrated that they had little-to-no regard for following the rules, the road or the law," said LAPD Capt. Lillian Carranza.

After coming to a stop near Hamlin Street and Wystone Avenue in Reseda, the two men bailed out of the pickup truck and into the darkness of a Reseda neighborhood filled with trees.

Police were searching for the suspects on the ground and over the air. One of the suspects was taken into custody at the scene. The second suspect was arrested shortly afterward.

Even though the arrest was made early, search teams, SWAT and K-9 units continued to search the area until confirmation that the second man taken into custody was in fact the suspect being sought.

Two carjacking suspects led authorities on a high-speed chase in Los Angeles County early Monday morning before bailing out in a Reseda neighborhood.