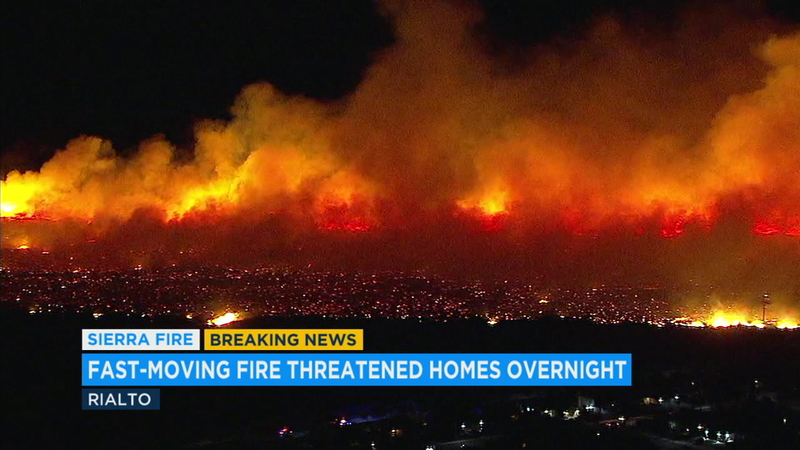 Sierra Fire in Rialto expands to 147 acres amid fierce winds

RIALTO, Calif. (KABC) -- A brush fire in the Rialto area of San Bernardino County burned more than 140 acres by Wednesday morning after erupting the previous night.

The blaze, dubbed the Sierra Fire, was reported shortly after 9 p.m. on Tuesday near Sierra and Riverside avenues, according to the San Bernardino County Fire Department.

By late Wednesday, the fire was 85 percent contained after burning 147 acres, authorities said, confirming that structure threat has been mitigated.

The fire appeared to lose strength as it moved south and away from homes late Tuesday night. It had grown from about 3 acres to approximately 20 acres within minutes of ignition.

Crews in fire trucks and a bulldozer immediately responded to the blaze while strong wind gusts appeared to move most of the flames away from nearby homes.

Despite the direction of the fire, embers from the blaze jumped Riverside Avenue, where some backyards and at least one palm tree caught fire in the Ferguson Park neighborhood.

Everyone in Rialto be safe!! pic.twitter.com/pHgtPg9knR

Firefighters worked against the 50 mph winds to spray water on the flaming palm tree, whose glowing embers jumped on multiple houses and caused major concern.

A number of power lines also appeared to catch fire as the wind-driven flames continued to quickly move near the neighborhood. Lights were also out in some parts of the area.

No structures were spotted on fire.

Meantime, footage from AIR7 HD showed residents packing their vehicles, though no official evacuation orders were announced. Traffic also built up along Locust Avenue as homeowners attempted to flee the area.

#LIVE: Traffic starts to build as nearby residents seen leaving from the area https://t.co/2C35hWdY22 pic.twitter.com/mKjPlv2pks