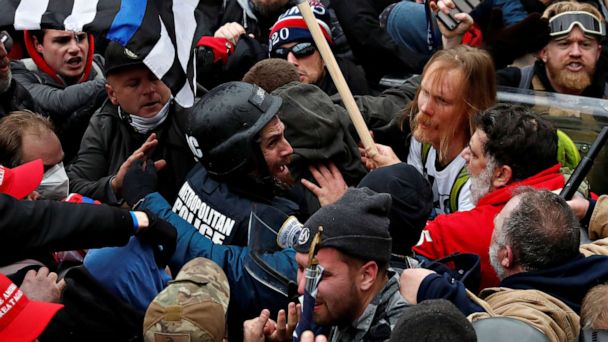 Federal authorities are continuing to charge rioters who took part in the siege on Capitol Hill.

These are the most recent charges:

The Justice Department has filed its first conspiracy charges from the Capitol riot against a Virginia man who they allege was an apparent leader of a group of militia members who were part of the mob that stormed the building.

Thomas Edward Caldwell is identified in an FBI affidavit as a member of the Oath Keepers. An agent alleges that he helped organize a group of eight to 10 of his fellow members to storm the Capitol with the intention of disrupting the counting of the Electoral College vote.

The group can be seen in video walking uniformly through a crowd of rioters trying to gain entrance to the Capitol.

Those members included co-conspirators Jessica Watkins and Donovan Crowl, who were charged for their role in the riots earlier this week. In social media posts, both Crowl and Watkins referred to Caldwell as "Commander," according to the court documents.

While inside the Capitol, Caldwell allegedly received Facebook messages telling him to "seal" in lawmakers in the tunnels under the Capitol and to "turn on gas." Other messages appeared to be trying to give him updates on the locations of lawmakers, the affidavit states.

Other texts reveal the extensive planning and even potential attacks that he and other members of the Oath Keepers were mounting leading up to the riots.

On Jan. 1, Caldwell allegedly messaged an individual recommending a room at the Comfort Inn Ballston in Arlington, Virginia, saying, "This is a good location and would allow us to hunt at night if we wanted to."

After the riot, Caldwell allegedly posted a Facebook message stating, "Us storming the castle. Please share. Sharon was right with me! I am such an instigator!" the affidavit states. He later wrote, "We need to do this at the local level. Lets storm the capitol in Ohio. Tell me when!"

A rioter who posed in front of the U.S. Capitol while wearing a shirt with the words "Murder the Media" emblazoned on it has been charged with illegally entering the Capitol. The phrase had also been etched onto a door inside the building, according to federal court documents.

In an interview with the Los Angeles Times, Nicholas DeCarlo admitted that he entered the Capitol, but said he did so as a "journalist."

The charging documents against DeCarlo state that he is not on record as a credited journalist.

A man who was captured on surveillance video attacking law enforcement with a bat at the entrance of the Capitol turned himself in to the Metropolitan Police Department on Monday.

Emanuel Jackson is allegedly the rioter seen in photos the FBI released to the public, according to federal court documents.

On the surveillance video, Jackson is allegedly seen making a fist and repeatedly striking a Capitol police officer while attempting to force himself into the building, his arrest affidavit states.

Later, he is "clearly observed" with a metal baseball bat striking a group of both Capitol and D.C. police officers, according to the court document.

It is unclear whether Jackson has retained an attorney.

A longtime Houston Police officer who resigned after he participated in the riot has been federally changed.

Tam Dinh Pham initially denied his involvement in the siege when he was interviewed at his home in Richmond on Jan. 12, according to court documents.

After the interview, Pham agreed to hand over his cellphone, which investigators noticed had no photos from Jan. 6, the affidavit states. However, the "Deleted Items" folder contained photos and images of him inside the Capitol building.


When agents advised Pham that it is illegal to lie to the FBI, he admitted that he was part of the crowd that stormed into the Capitol but denied taking part in any violence, according to the court documents.

A woman has been charged for participating in the riot after at least six people identified her by the Louis Vuitton sweater she was wearing that day.

In one video, Gina Bisignano allegedly was seen taking part in a skirmish with police trying to protect the Capitol building, according to an FBI affidavit.

Bisignano was allegedly part of a crowd that crushed a screaming police officer while a rioter grabbed his gas mask. At one point, Bisignano allegedly told the officer, "You hurt my f------ leg," the court documents state.

In a separate video, Bisignano is allegedly seen feet away from police, telling them to stand down.

After entering the Capitol, Bisignano was allegedly heard telling other rioters, "We need Americans. Come on guys. We needs patriots! You guys, it's the way in. We need some people."

2 Texas rioters, including a former Marine, accused of violence

Two Texas men have both been arrested over their roles in the violence at the Capitol, the Justice Department announced Tuesday.

Ryan Nichols and Alex Harkrider were identified from photos they posted to their social media accounts, along with several threatening messages calling for a violent overthrow of the government, according to an arrest affidavit.

In one video posted online, Nichols, a former Marine, can allegedly be seen yelling into a bullhorn in the direction of a large crowd, saying, "If you have a weapon, you need to get your weapon!" the federal court document states.

Nichols also allegedly said "This is the second revolution right here folks!" and "This is not a peaceful protest," according to the affidavit.

Both Nichols, 30, and Harkrider, 33, are seen in videos trying to force entry into the building, with Nichols allegedly spraying what appears to be a large canister of pepper spray in the direction of officers. Nichols was also allegedly in possession of a crowbar, the court document states.

The FBI also noted several other social posts from Nichols, including one on Dec. 24 that showed a bullet and stated, "By Bullet or Ballot, Restoration of the Republic is Coming," according to the affidavit. Another post on Dec. 28 stated, "Pence better do the right thing, or we're going to MAKE you do the right thing."

Nichols was once featured on "The Ellen Degeneres Show" in 2018 after he drove 18 hours to rescue dogs before Hurricane Florence made landfall in North Carolina.

It is unclear whether Nichols and Harkrider have retained attorneys.

Robert Gieswein -- part of the Oath-keepers, an extremist group related to The Three Percenters -- was charged with assaulting a federal officer with bear spray and a baseball bat.

An FBI affidavit confirmed that Gieswein runs a private paramilitary training group called the Woodland Wild Dogs and that he was identified from a patch for that group that was visible on a tactical vest he wore during the attack on Congress.

The affidavit said Gieswein gave a media interview echoing anti-Semitic conspiracy theories and that Congress needs "to get the corrupt politicians out of office. Pelosi, the Clintons ... every single one of them, Biden, Kamala."

Fee, a retired NYFD firefighter, allegedly sent a relative of his girlfriend a selfie of himself inside the Capitol, prosecutors said. He's been charged by authorities.

In the text message, Fee, 53, allegedly wrote that he was "at the tip of the spear," a reference to the Capitol rotunda, according to the court documents.

Fee drove to Washington, D.C., on Jan. 5, and a license plate reader in New York picked up the Chevy Tahoe he was driving upon his return on Jan. 7, the court documents state.

At his court appearance Tuesday, a judge ordered Fee to avoid all political gatherings and to avoid the U.S. Capitol and all state capitols upon his release. He must also surrender his two guns -- a pistol grip shotgun and an antique rifle.

It is unclear whether Fee has retained an attorney.

Nicholas Moncada, a 20-year-old former student at the Fashion Institute of Technology in Manhattan, was taken into custody at his Staten Island home Monday. He allegedly livestreamed his "storming" of the Capitol on Jan. 6, prosecutors said.

Moncada allegedly also posted a selfie of himself inside the Capitol, captioning it, "Outside Pelosi's office."

He was recognized by fellow FIT students, who then alerted the FBI to his involvement, according to the court documents.

During an appearance in a Brooklyn federal court Tuesday, Moncada was ordered to stay away from potentially antagonizing political events and speech after his release on $250,000 bond. His travel is also restricted to New York and Washington, D.C.

The bond was signed by Moncada's mother, grandmother and aunt.

Moncada was an illustration major, but had not been enrolled at the school since May 2020 and did not receive a degree, a spokesperson for FIT told ABC News.

In a statement to ABC News Monday, Moncada's attorney, Mario Gallucci, said he is not facing any violent charges.

"Mr. Moncada was taken into custody this morning by the FBI and has been charged with various sections of the United States Code for trespassing inside a restricted building and trying to disrupt or impeded the conduct of Government business, as well as, trespassing on the floor of various Government rooms including the House of Congress, the lobby adjacent to the floor and the Rayburn Room of the House of Congress," Galluci said. "I do not believe he is being charged with committing any acts of violence. Mr. Moncada denies any participation in the effort to overthrow the Government, and he looks forward to defending his good name."

Dozens of rioters who participated in the siege have already been taken into custody.