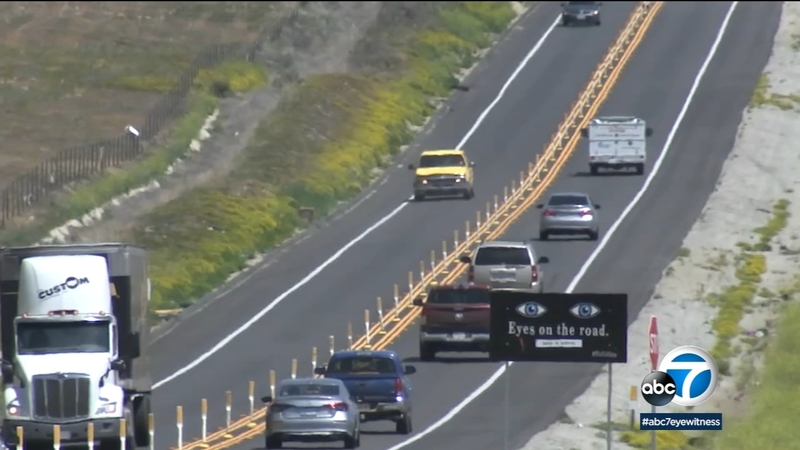 NUEVO, Calif. (KABC) -- The Ramona Expressway, a two-lane highway that connects the community of Nuevo with the Interstate 215 to the west, is considered by many in the area as one of the most dangerous stretches of road in Riverside County.

"We have horrific accidents," said Chuck Santone, who has lived in Nuevo for 17 years. "People drive as fast as they want, as crazy as they want.

Much has been done over the years to raise awareness. Signage advises drivers to keep their headlights on through the area. Stanchions have been added along the center divider to prevent unsafe passing.

But Santone said what's really necessary is more attention from the CHP, which is the agency assigned to patrol the unincorporated sections of Riverside County. And one of the problems is that the community of Nuevo is nowhere near a CHP station.

"We're right at the edge of everyone's jurisdiction," said Santone. "What we want is for there be a hub for an officer. And if he needs to go to help somewhere else that's fine; but always come back to us so we have a regular patrol."

Could the answer be as simple as an additional office and extra parking space? Riverside county 5th district supervisor Jeff Hewitt says it's possible and has donated his office inside the Riverside county sheriff's substation in Perris to the CHP.

"In public safety, response time is everything," said Hewitt. "By giving them a small satellite office, it's going to allow them to work out of it on large incidents, but also put them closer so response times are better."

CHP spokesperson Officer Ramon Duran said it's unlikely that an officer will be assigned to work out of the new office space. However, whichever officer is assigned that particular region will be encouraged to use the office as a base of operations throughout the day.

Riverside county code enforcement is also using the office space. Their roll in maintaining a safe environment along the Ramona Expressway involves making sure the countless street vendors who line up in the area are doing so in a safe manner.

"We have had, sadly, several instances where pedestrians have been hit and even killed crossing the highway in order to get to these street vendors," said Bob Magee, director of Riverside county code enforcement.

"We enforce and make sure they're complying with health department regulations; that they have a permit to operate; and that they're in a safe location. And if none of those things are correct, we have them pack up."

"Remember, when (you're) driving on the freeway and you see a highway patrolman come along, everybody starts driving better. So just that presence helps."