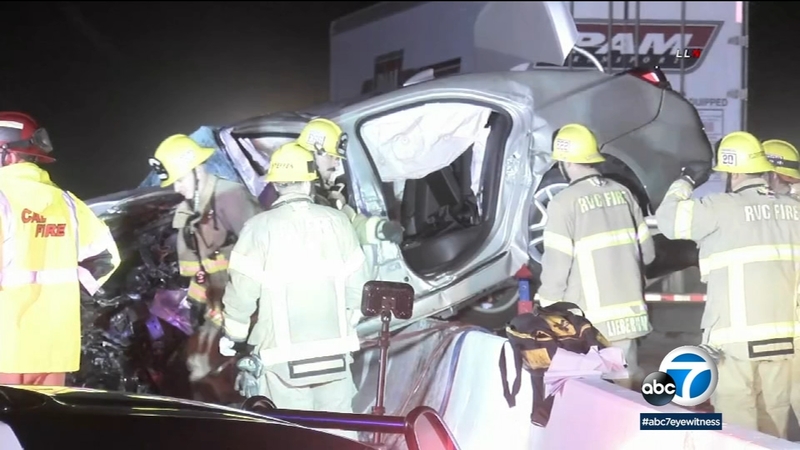 2 killed, 1 hurt in wrong-way crash on 60 Freeway near Moreno Valley

RIVERSIDE, Calif. (KABC) -- Two people were killed and a third person was hospitalized early Saturday morning after a wrong-way driver slammed into an oncoming car on the westbound 60 Freeway in Riverside County, authorities said.

According to the CHP, a 28-year-old female driver, later identified as Eva Lopez Gonzalez of Hemet, was traveling eastbound in the freeway's westbound lanes at about 90 mph in a Hyundai Sonata when her vehicle collided with a Chevy Malibu.

The force of the impact left the front ends of both cars mangled.

The Chevy's driver and passenger, both males, were traveling from Palm Springs to Pico Rivera at the time, investigators said. The driver was later identified as 49-year-old Antral Thomas of Pasadena.

Both drivers were pronounced dead at the scene, the Highway Patrol said. Their identities were not immediately released.

The Chevy's passenger, a 40-year-old resident of Pico Rivera, was transported to a hospital with moderate injuries, officials said.

News video from the crash site showed nearly a dozen Cal Fire firefighters assessing the wreckage of the victims' car, which ended up on top of the center median after the collision.

The 60 Freeway had been closed for construction work and was reopened shortly before the crash. All westbound lanes were again shut down when emergency responders arrived at the scene. The freeway was fully reopened shortly after 7:30 a.m.