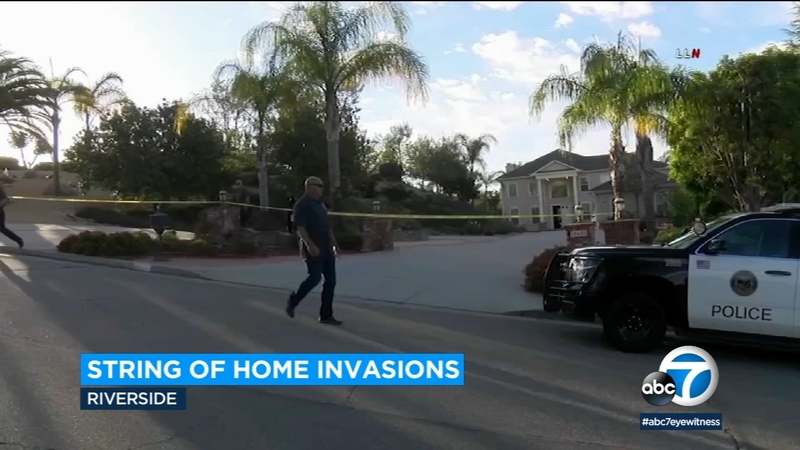 Riverside police investigating 4th home invasion over the past month

RIVERSIDE, Calif. (KABC) -- Residents in an upscale Riverside neighborhood are on alert following four home invasions that have occurred over the last month. Police still haven't linked any of them together as they continue to investigate the recent crimes.

The latest incident happened early Tuesday morning near Kyle Court and Lochmoor Drive, according to the Riverside Police Department. Nobody was hurt then, but another home invasion over the weekend did result in injuries.

In that case, a man was shot several times after three suspects entered his home on Moss Road just before 5 a.m. Sunday. He was rushed to the hospital, but is expected to survive.

A man remains hospitalized in critical condition after he was shot when three suspects broke into his home in Riverside, according to police.

Earlier this month, three people, including an 11-year-old, were held at gunpoint during another home invasion. Police said three suspects forced the two adults and child at gunpoint into a bathroom, where they were also duct taped.

The recent crimes have neighbors on edge and some have taken steps to protect themselves. One man said his family recently got a German Shepherd to protect their home.

"That's how worried we are. We don't want to have to use the type of defense that we have in the house, so we would rather have something that's outside that keeps anybody from even wanting to come into the property," he said.

Many of the homes in the area have surveillance video - evidence that, so far, investigators have chosen not to release.

Authorities are reminding residents to be on alert for anything usual and to contact police if they see something.