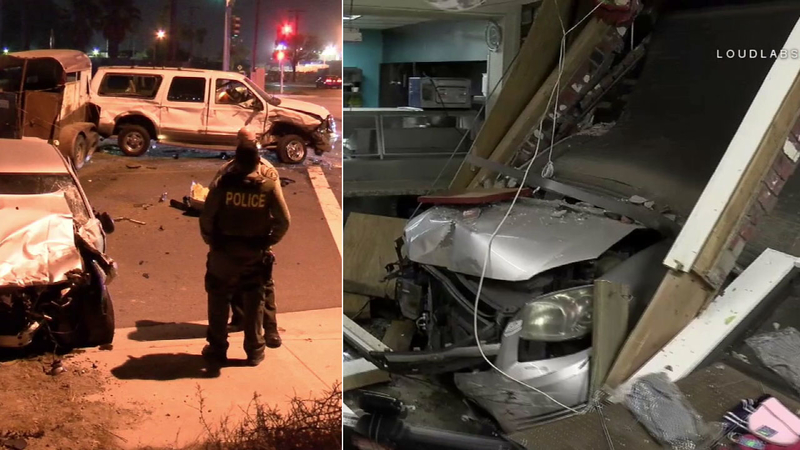 RIVERSIDE, Calif. (KABC) -- Suspects trying to flee from police after a street takeover in Riverside ended with several car crashes. Another crash, which may also be related, involved a vehicle slamming into a Jurupa Valley store.

Surveillance video captured a car barreling past a parking lot and into Chuy's Market in the 9700 block of Mission Boulevard at about 1 a.m. Sunday. The force of the impact knocked a fridge so far back, it dented another fridge inside the business.

The owner described the messy aftermath.

"I didn't believe it at first, but once we walked in, in reality we saw the mess, the glass, sodas. He busted a water line, so there was water everywhere. I had to run and shut the water off. Most of the computers got wet, so we don't know what's going to work and what's not going to work," said store owner Chuy Garcia.

A car slammed into Chuy's Market in Riverside, one of several crashes that may be related to street racing.

Three people were seen getting out of the vehicle. Sheriff's officials did not release information on whether anyone was in custody.

Not far away, Riverside County sheriff's officials busted a group taking over a nearby street. Many cars sped off, and one slammed into a utility pole near Agua Mansa Road and Brown Avenue. The driver was arrested and a passenger was taken to a hospital.

Just blocks away, another person believed to be involved in the street takeover crashed into a truck and a trailer carrying a cow. The driver was arrested and no passengers were hospitalized. There was no word on the condition of the cow.