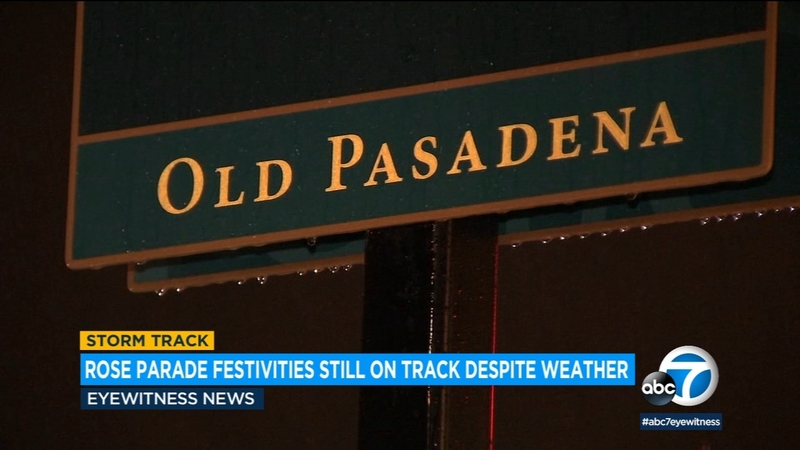 Preparations for the 133rd annual Rose Parade continued as a major winter storm drenched the Pasadena area on Thursday, but the rain failed to dampen the spirits of organizers who said the annual event is still scheduled to be held Saturday.

Thousands of spectators hoping to secure prime viewing for the parade will begin claiming spots along the route Friday to witness the return of the New Year's Day tradition after a one-year hiatus.

The 2021 parade was called off because of a winter surge in COVID-19 cases. Although infections are surging again in the county, Saturday's parade and accompanying Rose Bowl Game are moving ahead as scheduled.

People hoping to grab sidewalk seats along the 5 1/2-mile route can start claiming spots beginning at noon Friday, but all people and property such as blankets and chairs must remain on the curb until 11 p.m. After 11 p.m. Friday, spectators can move out to the blue "Honor Line'' on the street.

People planning to camp out overnight for the parade should take heed of the rules:
EMBED More News Videos

The Tournament of Roses returns to Pasadena this weekend after a one-year absence during the pandemic, and volunteers are putting in thousands of hours to get the floats ready.

-- Small, professionally made barbecues that are elevated at least 1 foot off the ground are permitted along the route, but they must be at least 25 feet from buildings and other combustibles. A fire extinguisher also must be readily available.

-- People under age 18 will only be permitted on the parade route from 10 p.m. Friday to 5 a.m. Saturday if they are supervised by an adult.

-- Paradegoers should be prepared for cold weather and dress in layers.

-- Tents, sofas or boxes that can be used as stools or seats are prohibited along the route.

-- Bonfires along the route are prohibited.

-- No items can be sold along the route without a city permit.

-- Selling spaces along the parade route is prohibited.

-- Horns may not be sold, given away or purchased along the route.

-- No public areas can be roped off.

-- Ladders or scaffolding that can be used for elevated viewing of the parade are prohibited.

-- Open containers of alcohol are prohibited on public streets and sidewalks and other public areas.

Also barred along the parade route are drones. The "No Drone Zone'' ordered by the Federal Aviation Administration also extends to flights over the Rose Bowl during the football game. Anyone who violates the drone ban may be subject to arrest, prosecution, jail and/or fines.