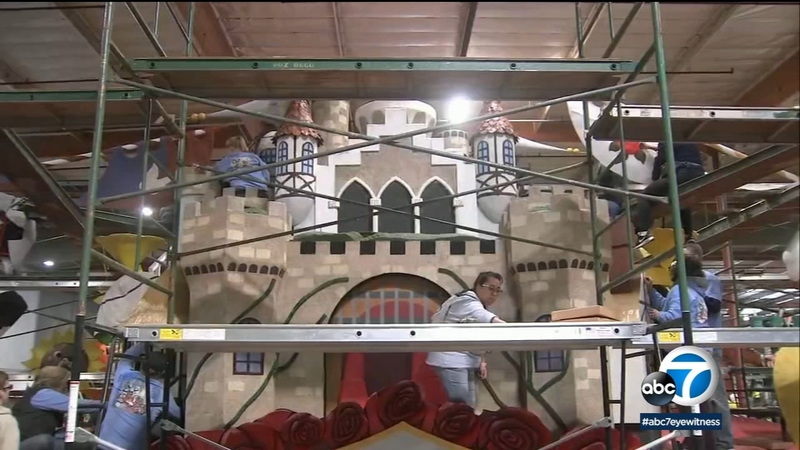 IRWINDALE, Calif. (KABC) -- The Rose Parade is just days away and volunteers were putting in extra hours to prepare the floats for the big day.

There were dozens of massive floats at Phoenix Floats in Irwindale Friday, tons of plant material, and thousands of volunteers were preparing and carefully sorting every little color.

"Trying to keep the green out of the yellow is the hardest part," said Gary Mueller.

"Whatever you do, you don't sneeze into the flowers...or you've just wasted a half hours' worth of work," said Vicky Bowden.

Precision produces the 'pow' in the giant structures. Float sponsors want their message to pop.

The SCAN Foundation will be honoring 41 million caregivers with their float.

"It is a whimsical rendition of "My Home is My Castle" and older people want to live well in the place they call home," said Gretchen Alkema, Vice President of The SCAN Foundation.

"Our float is called 'American Heroes.' We believe that really represents the power of hope," said Wilson Lee, Co-Founder of the Chinese American Heritage Foundation.

It is the foundation's second try at the parade. Their float had a mishap last year when transmission fluid hit the exhaust pipe sending a giant ball of smoke into the air. The entry didn't make it down Colorado Boulevard.

This year, many floats are equipped with interior fire suppression gear and drivers will get their own extinguishers.

Float building on this scale is always challenging and veteran volunteers advise to always have a plan B.

"They might run out of certain material, so instead of red mums we have to put red straw," said Ernie Arnold, Rotary Float Chairman.

For volunteers, the payoff is the vision completed.

"After we see everything come together on the float, we look back on our work. The big picture is more rewarding to us," one volunteer said.