Dog is returned to owner after being stolen from Rubidoux mobile home park, allegedly by Spectrum worker 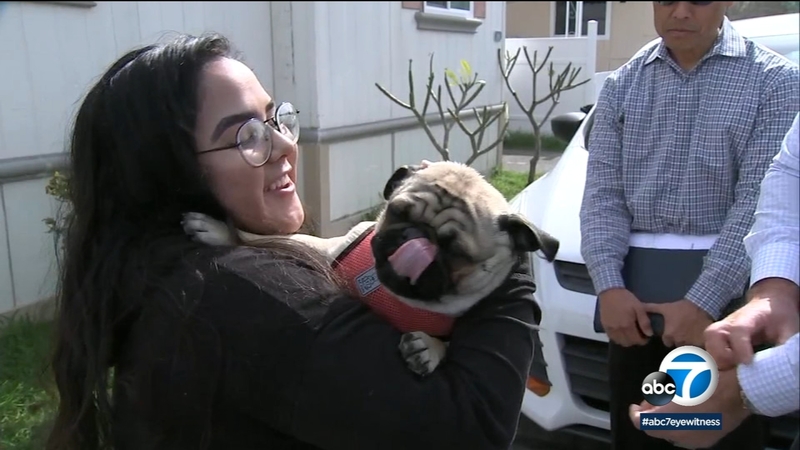 RUBIDOUX, Calif. (KABC) -- The day after surveillance video recorded a dog being stolen from a mobile home park in Rubidoux, allegedly by a Spectrum employee, the animal was returned to its owner on Tuesday by a representative of the cable company.

"ANDREW IS HOME!!! Thank you to everyone for your support and help getting my baby back safely," Melissa Cortez said in a tweet, which included a photo of her smiling and holding her beloved pug.

Andrew was taken about 12:30 p.m. Monday after a man exited a Spectrum van and opened a gate to the yard where the 10-month-old dog was enclosed. The incident was captured on video by cameras mounted outside a neighbor's home.

Cortez said the pug was returned to her by a Spectrum senior director of security.

The employee was initially placed on paid administrative leave, but Spectrum said later Tuesday he had been fired.

#Update Spectrum TV has fired the employee accused of steal a dog. pic.twitter.com/6eS3SFO59f

"The employee involved has been informed that he has been terminated," the company said.

"The Spectrum people just brought my baby back and I am beyond grateful that he is OK and safe," Cortez said in an interview. "That's what was important to me - just to get my baby back."

She recalled her reaction to seeing the surveillance video for the first time.

"It was horrifying," she said. "It's one thing when someone comes to your house to take your dog, it's another thing when you trust these type of people to come to your home."

The happy reunion. Andrew is back home after he was taken. The dognapping captures on a home security camera revealed an employee with Spectrum TV took the dog. Moments ago the company’s head of security returned the dog. pic.twitter.com/092KaXpDZu

Spectrum security director Bob Turnbull said an investigation into the matter was ongoing.

"I can tell you Spectrum takes these things very seriously," Turnbull said. "And we don't wish this upon anyone."