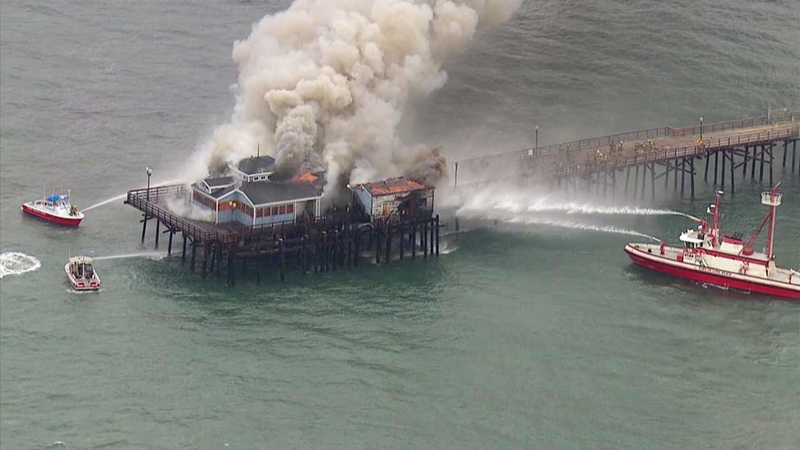 SEAL BEACH, Calif. (KABC) -- A fire ripped through the site of the former Ruby's Diner at the end of Seal Beach Pier Friday morning, sending a plume of thick, black smoke up into the air.

More than 60 Orange County Fire Authority firefighters battled the blaze at the abandoned restaurant in the 900 block of Ocean Avenue. The fire was reported just after 7:30 a.m.

Witnesses said they saw smoke initially coming from a bait shop near the old restaurant site.

A fire ripped through the site of the former Ruby's Diner at the end of Seal Beach Pier Friday morning, sending a plume of thick, black smoke up into the air.

"Then the smoke got black, then we seen the flames just shot up from the end of the pier, then it got bigger and bigger, then we were like, what's going on?" said Alfred Sunio of Long Beach.

Sunio was surfing with friends next to the pier as they watched the flames grow.

"The flames was like enormous. It was eerie, this black smoke coming over us," Sunio said.

Boats from the Los Angeles County and Long Beach fire departments and Orange County Harbor Patrol were used to battle the flames.

During one point in the firefight, the roof of the structure collapsed. The blaze was knocked down around 10 a.m., officials said. Firefighters succeeded in not letting the flames spread further down the pier.

The firefight was a challenge since the pier is made of wood. Also, firefighters were forced to haul hose from street hydrants down the length of the pier.

One firefighter was transported to Los Alamitos Medical Center after suffering a dislocated shoulder. The cause of the fire was under investigation. The pier was said to remain closed indefinitely.