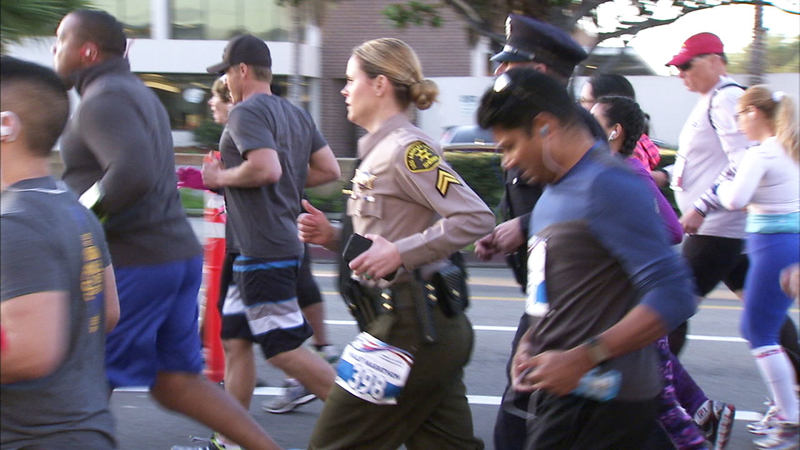 LOS ANGELES (KABC) -- Some 5,000 people participated in the second annual Run to Remember event at The Grove in Los Angeles, and one deputy took on the run in full uniform for two colleagues who lost their lives and one who is fighting to survive.

Los Angeles County Sheriff Jim McDonnell stood by Deputy Jenna Underwood Nunez as she explained there's no prep for this.

"It's not really something you can prepare for -- running in your full uniform -- because usually when you are running in your uniform, it's short bursts of energy, so running 13 miles is a little different," she shared.

Nunez aimed to stand out for three reasons at the 2017 Run to Remember Los Angeles.

She ran for her two fallen law enforcement brothers: Sgt. Steve Owen, who was shot and killed by a burglary suspect in the line of duty, and Sgt. Al Lopez, who died on duty in a car accident.

Nunez was also hoping to help a fellow colleague in need, Sgt. Jorge Chavez, who's fighting an aggressive leukemia. He hasn't found a match for a desperately needed bone marrow transplant.

"It all comes from the heart. And she's out there, and she wanted to be able to wear the uniform to represent all of us -- but not only in the sheriff's department but in law enforcement," McDonnell shared.

At about the two-and-a-half-hour mark, Nunez crossed the finish line with a smile and shout out to Chavez.

She hopes her effort in her uniform sparks interest in bone marrow donors.

"Having leukemia is probably one of the hardest things you could ever have, so this is temporary. What they're going through is pretty permanent, so I'm proud of them for their struggles, this is nothing compared to that," Nunez shared.

The sideline support for all others lost and remembered was a reflection, one officer said, of what she feels out on the street.