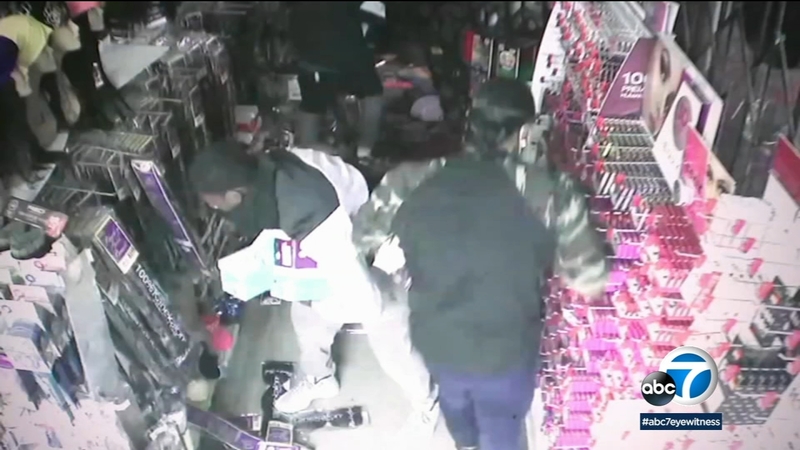 SAN BERNARDINO, Calif. (KABC) -- Widespread protesting and looting was seen over the weekend in San Bernardino, but in the aftermath, community members on Monday rallied together to show their support for some of the businesses owners.

Several businesses were looted in concentrated spots across the city, including a beauty supply store. Joyce Kang, the store's owner and single mother of two kids, says she can hardly believe what she saw on surveillance video from 9 p.m. Sunday.

One man was even seen setting fire to a city DMV office.
EMBED More News Videos

A man was caught on camera lighting a San Bernardino DMV office on fire as other areas of the city saw looting Sunday night.

Kang says looters showed up several times throughout the night and even appeared to try and set fire to the store. What wasn't burned or stolen, she said, was destroyed. She added that "destroying someone's business" should not be the way to bring attention to any issue.

Community members showed up and led a prayer outside the store to show their support for Kang.

Those who know her reacted to the looting with varying degrees.

"I don't think they should be sending this type of message, it's too angry, it's too violent," one person said, while others had slightly different views.

Hundreds of protesters gathered in downtown Riverside for a mostly peaceful demonstration on Monday.

In Riverside, thousands of protesters took to the streets in a mostly peaceful demonstration.

Police officers were mostly absent from the protests. A spokesperson for the Riverside Police Department said they did not want to agitate anyone and would allow the protesters to do so peacefully.