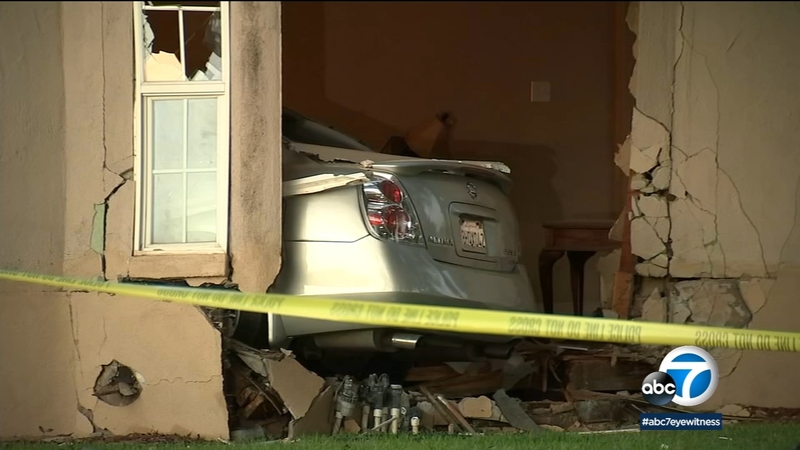 SAN BERNARDINO, Calif. (KABC) -- A suspect involved in two shootings, including one involving a police officer, was taken into custody after crashing into a home in San Bernardino Friday morning, authorities say.

San Bernardino police received multiple reports of a shooting in the area of Highland and Sterling avenues around 1:41 a.m.

A responding officer, who had already detained someone, witnessed a car-to-car shooting. Moments later, a second officer - who also had someone in custody - came upon the same car-to-car shooting, which had moved several blocks away to the parking lot of a 7-Eleven store near Highland Avenue and H Street.

At some point, one of the suspects in the car-to-car shooting and the second officer became engaged in a gun battle.

"The incident came to him, he reacted properly, he removed a separate person - an un-involved person from danger, and then he protected himself in returning fire as he was being shot at," San Bernardino Police Sgt. John Echevarria said.

Both suspects fled, and one driver crashed into the dining room of a home on H and 21st streets, one block from where the officer-involved shooting occurred.

"A patrol car came up, he slowed down, he stopped, he put his spotlight, I pointed at the house, he came out. I told him that there was a shooting, they came out, guns drawn," neighbor Robert Arellano said.

Police believe other occupants in the vehicle, a silver sedan, fled the scene before officers arrived.

Arellano said the family who lives in the home - a mother, father and their young son - were not injured in the crash.

Authorities did not say if the suspect who was arrested was armed or if he was the gunman who fired at the officer.