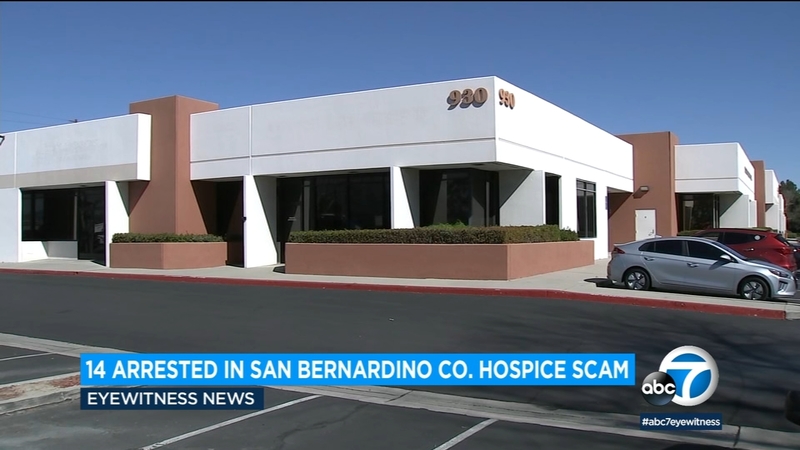 SAN BERNARDINO COUNTY, Calif. (KABC) -- Fourteen people have been arrested in connection with a hospice scam out of San Bernardino County that defrauded over $4 million dollars from Medicare and Medi-Cal.

"We alleged that these 14 individuals conspired together to cheat and defraud the Medicare and Medical-Cal system of more than $4.2 million dollars," said Bonta.

The facilities, New Hope Hospice in the city of Upland and Sterling Hospice Care in Colton, allegedly enrolled patients, some without their knowledge or understanding of hospice.

Bonta says that in many cases the patients were not terminally ill, which put their health in danger by limiting their access to medical care.

"When a patient is enrolled in hospice care they are no longer eligible to receive medical treatment to prolong their life," added Bonta.

The scam was discovered back in 2015 during an investigation into an illegal board and care facility, which revealed patients were enrolled in hospice.

Investigators unraveled a web of kickbacks paid to recruit patients and billing irregularities to avoid detection.

"They received the money for service they never rendered," said Bonta. "So they were able to profit considerably with no cost, low overhead because they were not providing hospice care, but they were receiving the full reimbursement from the government."

All 14 defendants have been arrested and charged with multiple felonies, including conspiracy to commit insurance fraud, grand theft and filing fraudulent insurance claims. In addition, some of the defendants also face identity theft, money laundering and tax evasion charges.