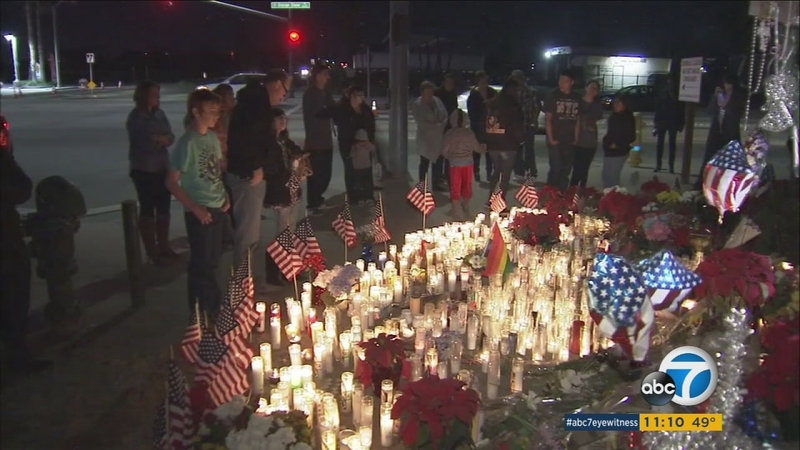 SAN BERNARDINO, Calif. (KABC) -- The San Bernardino terror attack shocked the nation one year ago on Friday, and several ceremonies and events were held to honor those killed and injured in the senseless tragedy.

The Inland Regional Center's conference room, where on Dec. 2, 2015, Syed Farook and his wife Tashfeen Malik carried out a mass shooting that left 14 people dead and 22 injured, was still closed down.

ABC News reported that Farook's wife had posted on social media, complaining about a holiday party and her husband being required to attend.

After the couple opened fire at the party and fled, investigators were able to track them down about four hours later at their Redlands home.

Farook and Malik led police on a short chase that ended less than 2 miles from the IRC site, where they were killed in a shootout with officers.

One year after the San Bernardino terror attack, the investigation into the deadly incident is ongoing.

An intense federal investigation was launched, coordinated with state and local law-enforcement agencies. One hundred prosecutors volunteered to assist with search warrants. and questioning witnesses.
A year later, the investigation is ongoing as questions still remain about what motivated the couple.

"Everyone brought incredible experience and training to bear on this case," said Eileen Decker, U.S. attorney for the for the Central District of California.

Meanwhile, the healing process was still underway in the community.

"There's a sadness that's here. I would hope that this would be a part of the healing process, and that the community could become a little bit closer together," said resident Tim Danson.

The San Bernardino Police Department hosted an event to honor the victims. They took on a 14-mile bike ride -- one mile for each person killed in the attack. Members of the community, including people who have a personal connection to the victims, also joined.

On the one-year anniversary of the San Bernardino terror attack, a group of cyclists paid tribute to the victims.

The event was also to honor heroes who saved lives that day.

"We might be shorthanded on police right now, but the ones that are here, they do an excellent job for us, and so does the fire department, the sheriffs. I mean, as the whole IE just came together, they took care of business that day," said resident Ken Pruitt.

One mile at a time, the victims were honored and the bravery of the men and women who responded and stopped the suspects in a wild shootout will be remembered.

A moment of silence was held outside the Inland Regional Center at about 10:58 a.m., the same time the mass shooting occurred one year ago. A bell also rang 14 times to honor each victim who died on that tragic day.

Sgt. Roberto Arellano, of the San Bernardino School District Police Department, was among the first responders who arrived at the chaotic scene last year.

"Co-workers, as they're running out in that area, seeing their co-workers, their friends, their family in that hurt," Arellano recalled. "There was a lot of emotion."

At Cal State San Bernardino, a "peace garden" was dedicated at an afternoon ceremony, and a "night of remembrance" memorial event was held hours later.

"Each victim was a public servant who blessed us each day with their skills and talents," said Mayor Carey Davis, one of several speakers at the somber memorial.

Police Chief Jarrod Burguan, whose department was lauded for its response to the attack, said the community "can be stronger than ever" in the aftermath of the tragedy "and we can win."

"This is our city," he said. "This is our story. We will finish that chapter and we will close the book on this event."

A solemn memorial was held outside the Inland Regional Center on Friday, Dec. 2, 2016, the one-year anniversary of the San Bernardino terror attack.