The memorial is currently under construction, but the model display exhibit gives people a glimpse of what to expect.
KABC
By Leticia Juarez 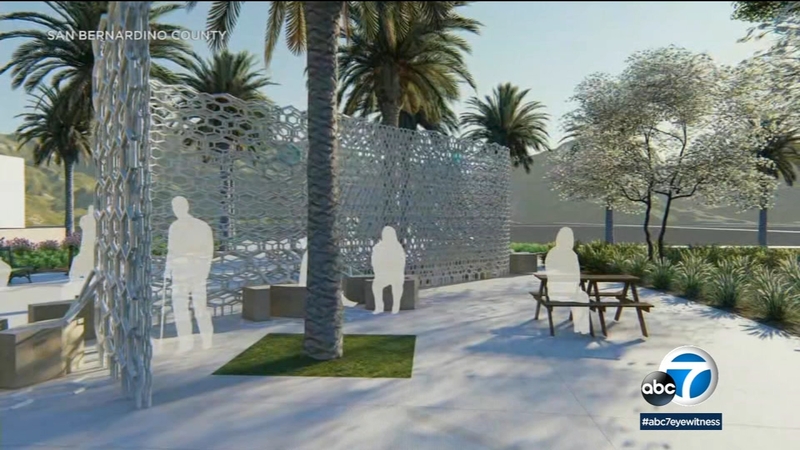 SAN BERNARDINO, Calif. (KABC) -- Although it isn't complete yet, the public is getting a first look at the long-awaited monument honoring the 14 people who were killed in the 2015 terrorist attack in San Bernardino.

An exhibit detailing the creation of the "Curtain of Courage" memorial opened its doors on Thursday at the San Bernardino County Museum in Redlands. Thursday marked sixth anniversary of the terrorist attack at the Inland Regional Center.

Fourteen people were killed and 22 were injured during a training meeting for employees of San Bernardino County's Environmental Health Services division.

The memorial is currently under construction at the county's government center, but the model display exhibit gives people a glimpse of what to expect. People can view renderings of the project, which was designed by Walter Hood, a world-renowned landscape architect and artist who worked on the memorial's design with the families of the 14 victims.

"It brings a little closure for the county of San Bernardino," said Arlen Verdehyou, the husband of Bennetta Betbadal, who was killed in the attack. "It gives us a little place to come on a yearly basis."

On the fifth anniversary of the San Bernardino mass shooting, victims were honored with a new memorial during a private service.

Once the memorial is complete, it'll include 14 alcoves, a bench with an inscription and a panel of colored glass pane chosen by the victim's family.

"They wanted something that was highly personal where their loved ones could be remembered," said spokesperson for San Bernardino County Felisa Cardona.

The December 2nd Memorial Committee was formed in 2016 and held several meetings to establish an overall vision for the memorial. Members wanted to recognize the diversity and lives of the victims as well as those who stepped up to save lives.

They said the memorial will be a place for "quiet reflection" to honor the people, stories, and lessons of that emotional day.

Sandra Mendoza, who lost her husband, Juan Espinosa, during the attack, said though it's been a tough six years, she's looking forward to the memorial's grand opening.

"You miss them terribly, and it was hard doing it by the way, but it's something that is going to be out there for everyone to see and appreciate," she said.

Wendy Womack-Smith, who lost her daughter Sierra Clayborn during the attack, recalls the exact moment she heard the devastating news and is slowly regaining her life back.

"This year, I was able to make a pie," she said. "I have not made a pie in six years, and I said, 'Come on God. Help me do this.' I made pies, and it was so cathartic because that's what I was doing when everything happened."

The exhibit is open until Dec. 19. The memorial is slated to be complete in spring 2022.