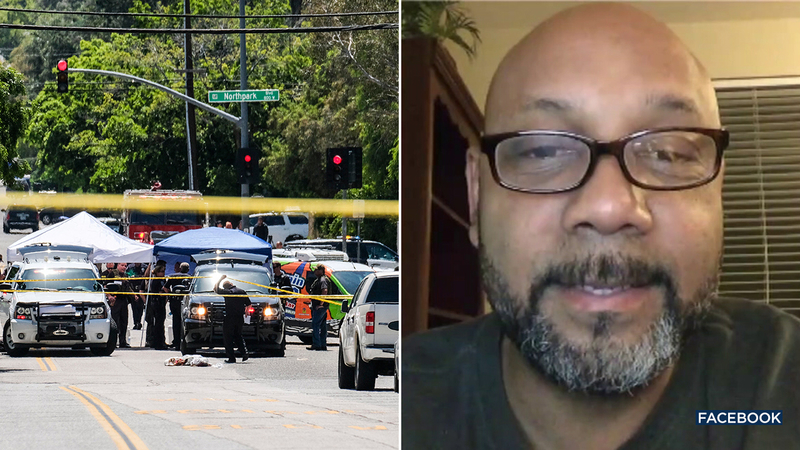 SAN BERNARDINO, Calif. (KABC) -- Authorities on Tuesday released new details about a murder-suicide at a San Bernardino elementary school that left a teacher and an 8-year-old boy dead.

A 9-year-old student, who was also struck by gunfire, is in stable condition and was in good spirits.

Investigators have seized electronic items from the home of the gunman, identified as 53-year-old Cedric Anderson of Riverside.

San Bernardino Police Chief Jarrod Burguan said during a news conference that Anderson was not currently employed, and his past employment history included maintenance as well as work as a pastor.

Anderson's criminal history included four prior arrests, dating from 1982 to 2013, for a weapons violation, domestic violence and theft, but he was never convicted of those charges.

Authorities said the estrangement between Anderson and his wife, 53-year-old special education teacher Karen Elaine Smith, occurred after the husband accused his spouse of infidelity. The couple had only been married since January, but their relationship had been ongoing for four years.

MORE: Wife left San Bernardino school shooting suspect after he showed 'other side'

According to the San Bernardino Police Department, officials at North Park Elementary had no previous knowledge of any tension between Smith and Anderson.

Smith had been private about her marriage, telling only a few close family members about the turmoil. The teacher's daughter told investigators that although Anderson had made threats in the past, Smith had not taken them very seriously.

The threats were believed to be efforts to gain attention. Burguan said Smith moved out of the couple's residence in mid-March and had been staying with family.

Surveillance cameras recorded Anderson as he initially tried to enter the school in the 5300 block of N. H Street through a locked secondary door Monday morning. He was then forced to enter through the main entrance, where he told staff that he was there to drop something off for his wife.

"He was a short distance into the classroom when he immediately opened fire," Burguan said. "(Smith) was kind of toward the middle of the room but on the other side. I would estimate the distance to be 10 to 15 feet away."

Burguan said 10 rounds were fired, with one reload as the gun holds six rounds. The only record on the weapon was that it was sold in 1979 in the state of Michigan, and Anderson was not the buyer.

"She was standing in front of a table-type desk or seated in front of that area," Burguan continued, adding that the two children who were struck by "errant rounds" were standing near her.

Eight-year-old Jonathan Martinez, who had Williams syndrome, died after being airlifted to a hospital. A GoFundMe page had raised more than $54,000 in his honor as of Tuesday afternoon.

No suicide note was discovered at Anderson's Riverside home, police said. Investigators did find a detailed to-do list that described how the couple might repair their marriage after Anderson felt "disrespected."

Anderson had three adult children, all of whom have been accounted for.