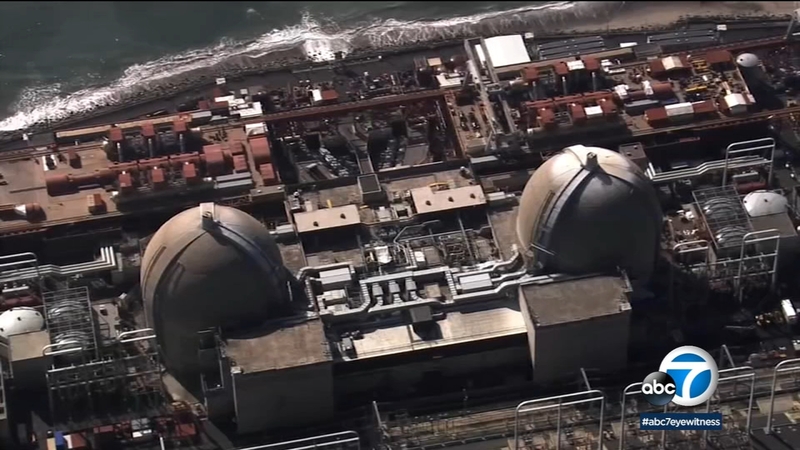 Lucy Abel, who enjoyed the state park in the surrounding area, knew the two domes off the coast of San Onofre State Beach well. They're hard to miss off the 5 Freeway.

"We know it's a landmark," Abel said.

The domes, part of domes, were coming down along with several buildings, offshore buoys and anchors and a portion of the offshore conduits - the large pipes which brought and discharged ocean cooling water to the plant.

On Jan. 22, SCE announced the dismantlement of SONGS could start as early as Feb. 22 and continue over the next eight years.

Able worried about the breakdown.

"I'm happy to hear of it. I'm just concerned that they do it safely. That's my main priority even if it took longer as long as it was done right," Abel said.

An SCE spokesperson told Eyewitness News that letters were out telling 12,000 people in communities within a five-mile radius of the plant about the procedure.

John Ivins, who lives in San Clemente, just got his notice. Ivins had a history with SONGS. Both his parents worked here.

"It would make more sense for it to be operational than dismantling it and having all maybe potential waste go back into the ocean," Ivins said.

The utilities that oversaw the now closed San Onofre nuclear plant has reached a settlement, which amounts to lower bills for some residents.

SCE said its dismantlement plan was in compliance with the U.S. Nuclear Regulatory Commission.

According to SCE, the spent nuclear fuel will remain in stainless steel canisters which are welded shut and will be stored in concrete enclosures on site. Transfer of it from wet to this concrete dry fuel storage system was expected to be complete by late summer 2020.

The plant shut down in 2012 after a leak of radioactive steam that January.

Nuclear waste was not of concern for surfer Bret Baker who has enjoyed waves here for the past three decades.

"I don't think the danger of radiation is too bad. They just need to dismantle it and remove it from being an eyesore," Baker said.