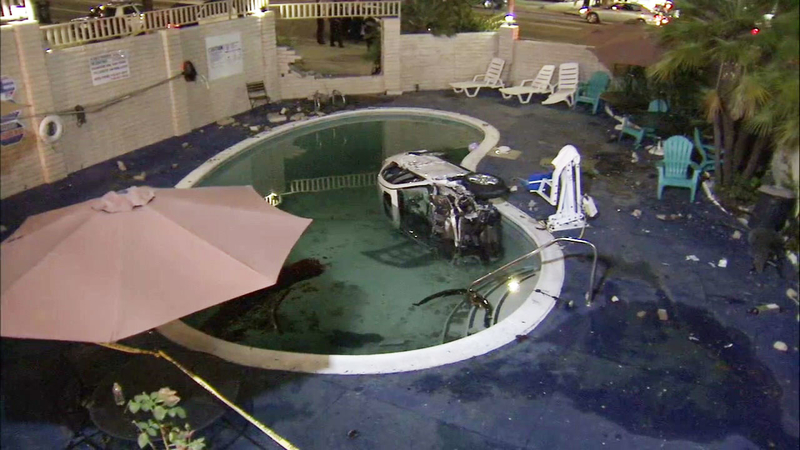 The crash was reported about 7:30 p.m. in the 200 block of Gaffey Street, according to preliminary information from Los Angeles police.

The driver was traveling westbound on 1st Street turning left on Gaffey when he lost control of his SUV. The Toyota busted through a brick wall and landed in the swimming pool at the Vagabond Inn.

A total of eight patients were injured in the wreck, including one vehicle occupant who was transported to a nearby hospital. He was reported to be in stable condition.

Officials said children between the ages of six and 10 were in the pool when the SUV crashed down into the swimming pool. They were not seriously hurt and transported to a nearby hospital for evaluation.

Johnathan Zayas was working at a gas station across the street when he heard screeching tires, and ran to help.

"I ran over there and people were trying to lift the car...I took this guy out of the car, you know, try to unbuckle him...he was choking...and someone did CPR," he said.

Police said they were investigating whether the driver, a man in his 20s, was driving under the influence of drugs or alcohol.
Report a correction or typo
Related topics:
san pedrolos angelescar crashpoolcar into building
Copyright © 2022 KABC Television, LLC. All rights reserved.
TOP STORIES
Death toll rises to 21, mostly children, in TX school shooting
Uvalde school shooting: What we know about 19 kids, teacher killed
Watch Steve Kerr's raw, emotional plea after Texas shooting
CA water board adopts ban on watering some green spaces amid drought
Suspect wounded after CHP, deputies are fired upon in East LA
Mater Dei HS celebrates 3 Heisman Trophy winners amid controversy
More water restrictions expected this summer
Show More
Biden says 'we have to act' after Texas school shooting
What is monkeypox? CDC updates doctors as CA reports 1st possible case
11 killed in shooting attacks on 2 bars in Mexico
How to talk to kids about Texas school shooting
A look at some of the deadliest US school shootings
More TOP STORIES News