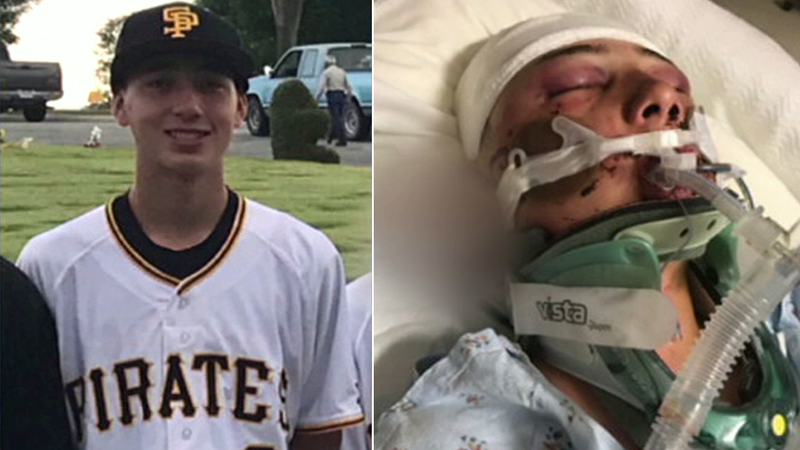 TORRANCE, Calif. (KABC) -- The mother and aunt of a 15-year-old junior varsity baseball player are hoping the suspects who brutally beat up the teen come forward.

"He's just a kid. I just feel like how could somebody do this to him? He's my son. How could you leave my son laying in an alley face down?" Charlene Douthit said.

Evan Jimenez, who plays for San Pedro High School, walked a female friend home after a game Thursday night. When they were walking near the area of 2nd and Bandini streets, two men suddenly approached Evan, according to family members.

"They approached him and asked him where he was from. He said that he wasn't from anywhere. A Hispanic guy pushed him and my nephew fell and got back up. Then the Hispanic guy grabbed a bottle from the floor and hit him in the face with it," aunt Debra Alvarado said.

The suspects fled the scene after beating him up. Friends arrived and rushed the unconscious teen to Harbor-UCLA Medical Center. His family cannot understand why anyone would attack him.

"He's a fighter. He's going to be fine. It might take a long time, but he's going to make it," Douthit said.

There have been small improvements in Evan's condition, but he remains hospitalized and his mother has not left his side.

A GoFundMe account has been set up to help pay for his medical expenses, you can donate by going to gofundme.com/evans-medical-expensesrecover-fund.