Residents are seeking protection for the tide pools at White Point Beach in San Pedro after noticing the overharvesting of edible sea life.
KABC 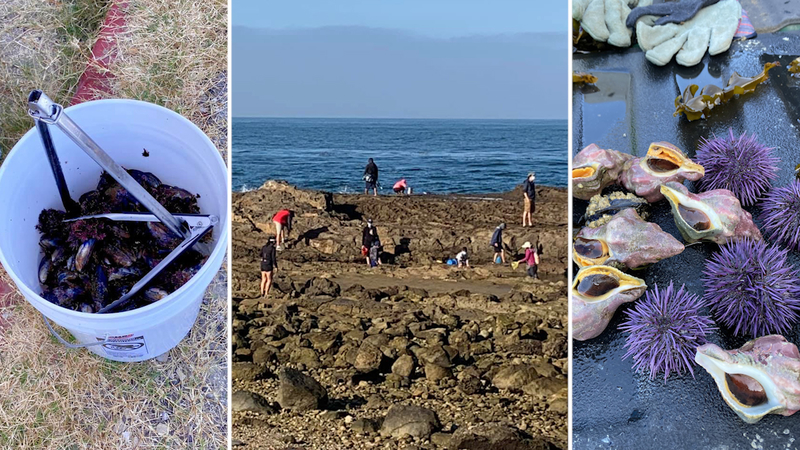 SAN PEDRO, Calif. (KABC) -- Families, fishermen and foragers alike have been visiting the tide pools at White Point Beach for generations, but it wasn't until recently that locals noticed a change.

"After the beaches reopened, that's when we saw an influx of visitors coming to White Point Beach taking invertebrate sea life by the droves," said San Pedro resident Drew Leach. "People were showing up with knives, screwdrivers, rakes, tools, buckets, huge coolers and just packing it with sea life."

At low tide, water is about ankle-deep, making it easy to find and take mussels, urchins and other sea creatures at the popular Palos Verdes Peninsula spot.

USC Sea Grant Education Programs Manager Linda Chilton said the overharvesting of sea life at the tide pools could have a devastating effect on the ecosystem.

"We know that mussel populations from research have been declining along the coast over the last multiple decades," Chilton said. "When you remove specific organisms, you reduce the bio diversity. You're changing the health and how well that environment can survive."

For those that have a permit from the California Department of Fish and Wildlife, it is legal to take certain amounts of specific species at the tide pools. For example, 10 pounds of mussels per person is allowed with a permit.

"These mussel beds are such an important place for so much biodiversity, but also food for migratory birds," Chilton said. "So, that complexity often doesn't come into the picture when someone's out collecting."

Chilton added that it's important to understand the reasons why harvesters are taking sea life from tide pools.

"How do people feed their families? We're also dealing with cultural connections of indigenous people," Chilton said. "We're also probably seeing one of those booms of people going out into natural areas because, to some degree, they're limited right now."

A Change.org petition calling for the protection of the White Point Beach tide pools was created in July, which caught the eye of San Pedro resident Drew Leach.

Leach, who has a background in public policy and environmental conservation, founded the White Point Patrol in August.

"We now have about 57 volunteers, many of whom embark on daily patrols to gather information about human behavior in the areas as well as to talk about the types of life that can be taken and not taken and how you can take it," Leach said.

"Our goal is not for people to leave; we want them to stay and enjoy and view the beauties that belong to White Point Beach, but we really need, now more than ever, to protect our coastal ecosystem," Leach said.

Leach said she hopes the group's outreach and research will lead to legislation that would make the tide pools at White Point Beach a State Marina Conservation Area, in order to further protect certain species from overharvesting.