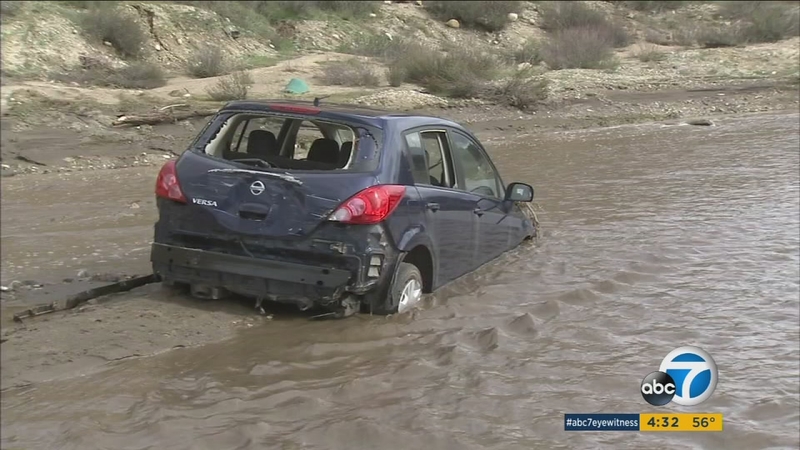 Los Angeles County sheriff's deputies had to pull a car that was swept away in Placerita Canyon Sunday after a woman tried to drive through the flooded area. The woman was able flee the car before it was thrown around in the creek.

In Sand Canyon, where a wildfire charred more than 41,000 acres, heavy downpours left areas covered in mud. Residents out there had been under mandatory evacuations because the rains would saturate the burned soil, leading to massive mud and debris flows.


Many people said they hope sunny skies will stick around for a while after being pummeled by the three-storm weather system, especially after the Placerita Canyon creek quickly overflowed.

A torrent of mud and water flowed down the side of a hill in Lomita Sunday, causing damage to a few homes in the area after a large storm hit the Southland.

For residents in Lomita, many homes became caked with mud after a torrent of the wet soil streamed down a hillside. The torrent of mud and water slammed into a condominium complex that is under construction.

The water continued down into at least three homes, and one homeowner said they had two feet of muddy water inside the first floor.

Carlson said he thought the gushing muddy water would come into the rest of the neighborhood and damage more homes.

City crews were able to clean most of the mud from the affected cul-de-sac Monday morning. Residents in the area said the unstable soil may have come from recent changes done to the Rolling Hills Country Club.

The rains turned the club into a massive mud pit. The general manager of the club could not be reached for comment.

A couple in Lytle Creek recalled a scary situation when they were caught in a flash flood while driving home from Wrightwood during a large winter storm that hit the Southland.

For the Inland Empire, snow flurries slowed down traffic in the Cajon Pass but did not lead to any closures.

Residents in Lytle Creek experienced heavy rains, which created small waterfalls on the mountainsides and rockslides that partially blocked a roadway.

A portion of Swarthout Canyon Road remained underwater Monday, and an abandoned car clung to the side of the road. On Sunday, the occupants in the car were rescued after they became trapped.

A truck is shown stuck in Lytle Creek on Monday, Jan. 23, 2017, after a storm flooded a small waterway after a massive storm hit the Southland.

Another couple, Albert Rogers and his wife Kim, came out to look for their Jeep after it had washed away while they were coming home from Wrightwood.

"There was a little creek that we crossed over. The Jeep got stuck in a little rut that was on the bottom," Kim Rogers said. "So as we were trying to back out of it, a flash flood came down the mountain. It hit the back of our Jeep and flipped us over."

Albert Rogers said they ended up neck deep in water. The couple were able to crawl out of the window and managed to get on an island but remained trapped for four hours in the cold, windy and wet night.

"I was doing everything to shield my wife from the wind and rain. It was terrible," Albert Rogers said.

They were eventually rescued by two Army reserves who were driving by and spotted the couple. Kim Rogers said she ended up with hypothermia. They couple said they are lucky to be alive.

"We're very, very fortunate. I know our Jeep is probably completely destroyed, but we're OK and that's all that matters," Kim Rogers said.

Showers are expected to linger around parts of the Southland until Tuesday. After that, there will be cool temperatures for the remainder of the week until conditions warm up over the weekend.
Related topics:
weathersouthern californialytle creeklomitasanta claritalos angeles countysan bernardino countysnow stormfloodingwinter stormrainmudslideflash flooding
Copyright © 2022 KABC Television, LLC. All rights reserved.
TOP STORIES
Kidnapped SoCal teen found in NY thanks to quick-thinking detective
FTC warns about baby formula scams on the rise amid shortage
NY high court to determine if Bronx Zoo elephant is a person
16-year-old girl stabbed by classmate in Montclair, police say
$45,000 reward offered in case of teen killed in Inglewood shooting
Controversy surrounds Villanueva over campaign ad filmed in church
House passes terrorism bill after shooting in Buffalo, New York
Show More
More than 50 brown pelicans found injured, sick or starving in SoCal
LAUSD gets more than $44M in grant funds for under-resourced campuses
Norwalk teacher arrested for allegedly sexually abusing 2 students
Alleged gunman sent diary to newspaper before OC church attack
What is monkeypox? What to know after US confirms 1st 2022 case
More TOP STORIES News