Several organizations are asking the Santa Ana City Council to divest the city's police department and instead invest in its youth programs, among other areas.
KABC
By Jessica De Nova 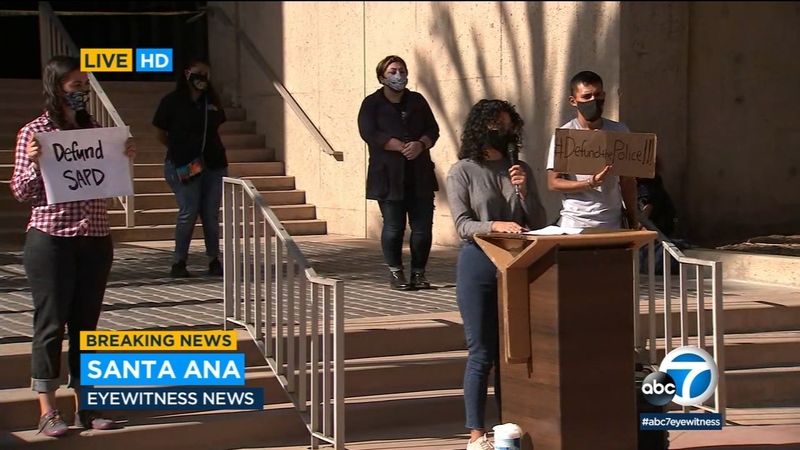 SANTA ANA, Calif. (KABC) -- Demonstrators on Friday showed their support for the Supreme Court's ruling on the Deferred Action for Childhood Arrivals program at a rally in Santa Ana. They also called to abolish U.S. Immigration and Customs Enforcement and "defund the police."

Several organizations were represented as the Santa Ana City Council prepared within chambers for a vote on the city's budget. The group is asking for the defunding of the city's police department.

"We need to re-imagine crisis management," said Roberto Herrera, a member of the Santa Ana People's Budget organization. "I'm a data analyst and I looked at our calls for service for last year. Overwhelmingly, 41% of calls are for non-violent issues. Only 17% are for high or high priority. So we do not need police responding these non-crisis interventions. We need crisis intervention workers for that."

The Los Angeles City Council is expected to meet Tuesday to discuss a proposal to slash $100 million to $150 million from the Los Angeles Police Department's proposed 2020-2021 budget.

More specifically, Herrera says they are looking to divest the Santa Ana Police Department, and instead invest in community, in its youth programs, intervention defense fund and worker cooperatives among other areas.

A spokesperson for the Santa Ana City Council said an oversight committee was on the agenda. Its purpose would be to keep an eye on the police department.

ABC7 reached out to the Santa Ana Police Department, but a spokesperson said the police chief would not be commenting at the time.
Report a correction or typo
Related topics:
santa anaorange countyorange county newsblack lives matterlatinosheriffcommunitypolice
Copyright © 2021 KABC-TV. All Rights Reserved.
More Videos
From CNN Newsource affiliates
TOP STORIES