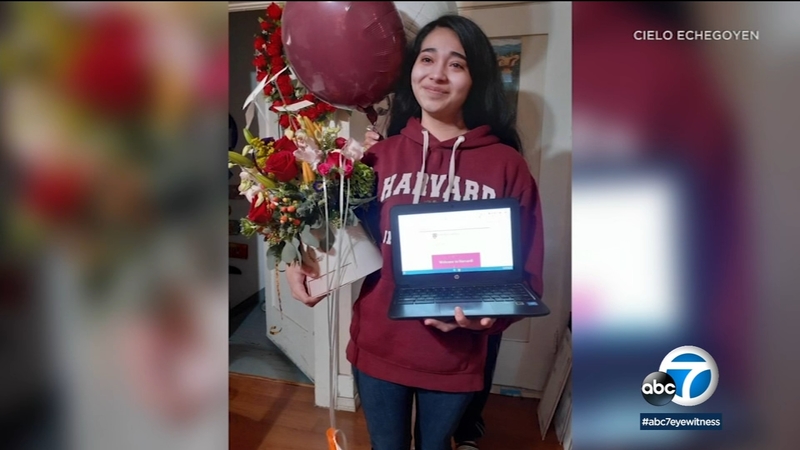 SANTA ANA, Calif. (KABC) -- With an entire cheer squad of siblings by her side, a video of a Santa Ana High School senior reacting to her acceptance to Harvard University has gone viral.

Cielo's mother, a Mexican immigrant, is seen beaming with pride as she hugs her daughter.

"My palms were sweating, my legs were shaking, my heart was beating because I was so excited and Harvard has been my dream school since I can remember so to be accepted - it still feels unreal," Cielo Echegoyen said.

The dream that came true is a big deal for any student, but even more so for Cielo who defied all the odds stacked against her.

She's only the fourth Santa Ana High School student to accomplish this. Most families there, like Cielo's, struggle to make ends meet. According to school administrators, of the nearly 3,300 students at SAHS, 84% are socioeconomically disadvantaged. That means their household income is at 130% or more below the federal poverty line.

"Especially with my dad not being here my junior year - that was a particularly tough moment and there were times when my family relied on my teachers to pay for rent," Echegoyen said.

Cielo's hardships make her a fighter.

In middle school, she was diagnosed with pectus excavatum. Her sternum caved in, putting pressure on her heart and lungs. Her surgeon - a Harvard alumnus - ignited Cielo's interest in medicine and the Ivy League university.

"My maternal grandma, she passed from colon cancer and paternal grandpa has carcinoma at the moment, so I decided that I wanted to major in molecular and cell biology and be an oncologist," Echegoyen said.

Cielo's goals include helping solve inequities in the medical field, be an ally for the undocumented community and give back like her mentor - Dr. Gloria Montiel.

"She was an incredible mentor. I love her so much, and I owe so much to her," Echegoyen said.

Dr. Montiel was the first Santa Ana High student to attend Harvard, breaking barriers while undocumented, determined to walk others through the path she carved.

Grateful her father is back home and for the village behind her, Cielo encourages others to overcome hurdles.

"I understand that rejection is scary. I understand that it's nerve-racking, but it's so much better to try than to live with that doubt and just trust yourself. Trust your capabilities and everything else will fall into place accordingly," Echegoyen said.