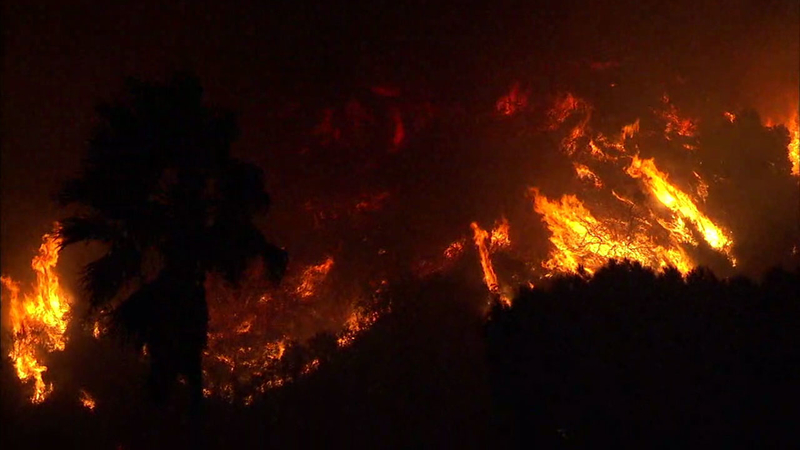 Driven by powerful winds, the Thomas Fire quickly spread to thousands of acres in Ventura County on Monday, Dec. 4, 2017.

But those winds quickly fueled the fire, causing it to reach at least 10,000 acres by the evening hours, with no containment.

Authorities said at least one person was killed in a car crash connected to the fire. A source told Eyewitness News the person appeared to be fleeing from the blaze.

#ThomasFire This is an updated perimeter map. This fire is burning in steep terrain with 25 to 30 mph wind. #VCFD @VCFD pic.twitter.com/S4IVeWRInU

The blaze eventually jumped SR-150, causing the highway's closure as it continued to eat through dry brush on both sides.

By the evening hours, at least two structures were destroyed but it was unclear if they were homes, according to Ventura County Fire officials. They did not have an exact number on how many structures may have been lost.

Footage from AIR7 HD, along with SkyMap7 technology, showed a mobile home park in Wheeler Canyon completely destroyed by the blaze.

Evacuations were issued for the college, a campground north of Santa Paula and residents in northern Santa Paula.

#ThomasFire - mandatory evacuations ordered for East Ventura, north of foothill Road. The rapid rate of spread will push this fire into that area within a few hours. pic.twitter.com/wfYwI2S8vu

Authorities issued mandatory evacuation orders for eastern Ventura and at least 1,000 homes were under the orders. Neighborhoods around Foothill Road were also evacuated.

After midnight Tuesday, authorities issued more evacuation orders for the western part of Ventura, stating neighborhoods north of Main Street to Shell Road must be cleared.

Residents, such as Gilbert Acevedo of Santa Paula, said they are afraid they may lose everything they have.

"It's pretty bad. Hasn't been like this. Maybe 15 years is the last time it happened, and that time it burned maybe to the back of the yards - everywhere," he said.

An evacuation shelter was set up at the Ventura County Fairgrounds and Nordhoff High School in Ojai.

All schools in Santa Paula were canceled Tuesday, as well as classes at the college.

A 50-acre spot fire was spotted near Grant Park in Ventura, by Cedar and Poli streets.