Student's harrowing account of Saugus High School shooting: 'I was terrified I'd get a bullet to the back' 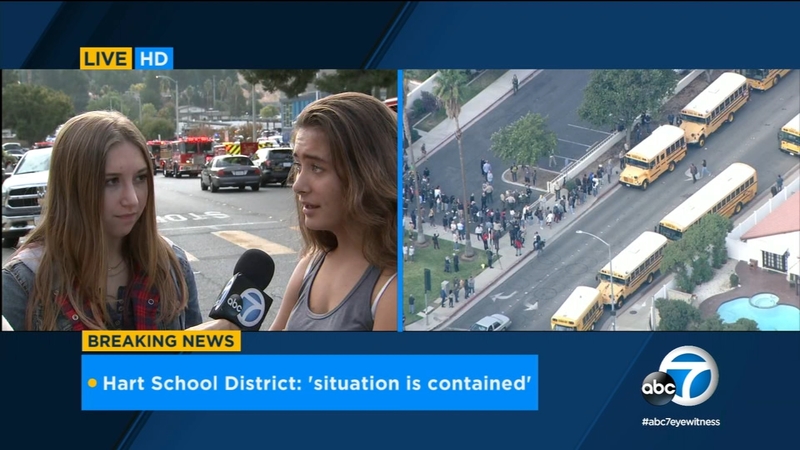 SANTA CLARITA, Calif. (KABC) -- A Saugus High School student said she will never forget the "horrified" looks on the faces of her classmates as they ran for safety during Thursday's fatal shooting.

"It was just that fear that you can't outrun a gun. You always think that you can as a teenager, but then when you actually hear it," student Hannah Schooping told ABC7, adding that she was terrified she would be shot in the back. "You're blindsided, you're terrified, you're running, you're looking for your friends but you're thinking about yourself."

Schooping said she was worried about her twin brother Wyatt, who she had forgotten stayed home sick with a fever that day. Otherwise, Schooping said, he likely would have been in the area where the shots rang out.

"I had a panic attack. I was crying, but my brother doesn't have his phone on him," she explained. Schooping eventually was able to get in contact with her mother, who confirmed that Wyatt was safe at home.

"If someone's sibling got shot, I don't know how they would feel right now. If Wyatt got shot, I can't imagine what would happen," Schooping said.

A Saugus High School student said she thought she was going to die during the Santa Clarita school shooting.

Schooping and fellow student Lauren Farmer said the fact that the shooting took place so early in the day likely saved lives because the area where the shots were fired is much more crowded later in the day.

"I'm thankful that he did it before first period because everyone was in their classes and only a few people showed up to the quad area in the morning. There was definitely an advantage for the students," Schooping added.

Added Farmer: "I knew it wasn't a drill when I remembered we don't have drills this early in the morning."

"We also don't have drills with gunshots," Schooping interjected.