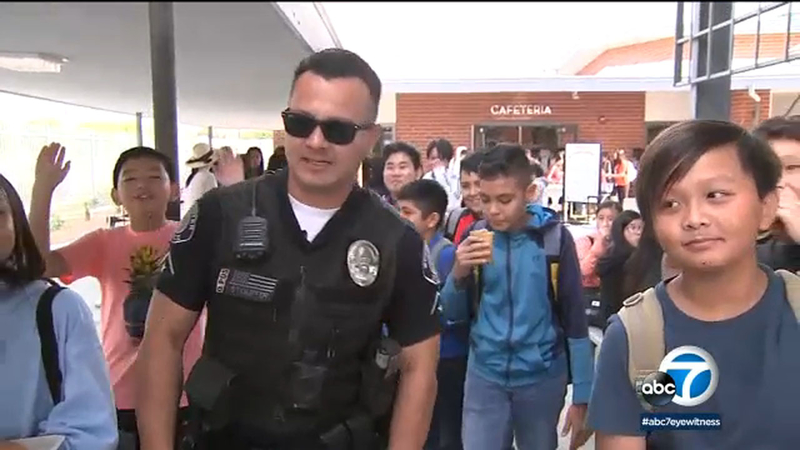 WESTMINSTER, Calif. (KABC) -- Since the beginning of the school year, Officer Jason Stouffer has been building trust with students at five schools in Westminster as the city's first-ever school resource officer.

"I've done the gang stuff. I've done the patrol stuff. I've learned throughout my tenure that if I can connect with the kids, I can maybe prevent something that's happening in the future," Stouffer said.

School security is at the top of his priority list, he said.

"I have to smile and wave, but at the same time, I have to be prepared for anything that's gonna happen on that campus."

This is a trial run for the program, which will be a five-year assignment for Stouffer.

"We wanted to have an officer at the schools where he can interact with the school staff as well as the students and actually help the students understand what to expect from us if a critical incident does occur," said Commander Kevin MacCormick of the Westminster Police Department.

The school board and superintendent worked diligently, collaborating with the police department to make it happen.

"We've seen a night and day," said Warner Middle School Principal Tiffany Harville. "I know it's only been a couple of months that we've had him, but he's kind of inserted himself like right away."

While the department's number one priority is patrolling the streets, they say they hope to keep this relationship going.

"As long as the staffing stays up, the number of our officers stays up, then we'll look into the future of possibly adding on future SROs," said MacCormick.

As a father himself, Stouffer is all-in with these students, taking on a huge responsibility.

"All the kids are now my kids when I'm there on campus. I have to treat them as such. The parents are entrusting me for their well-being and safety on campus."