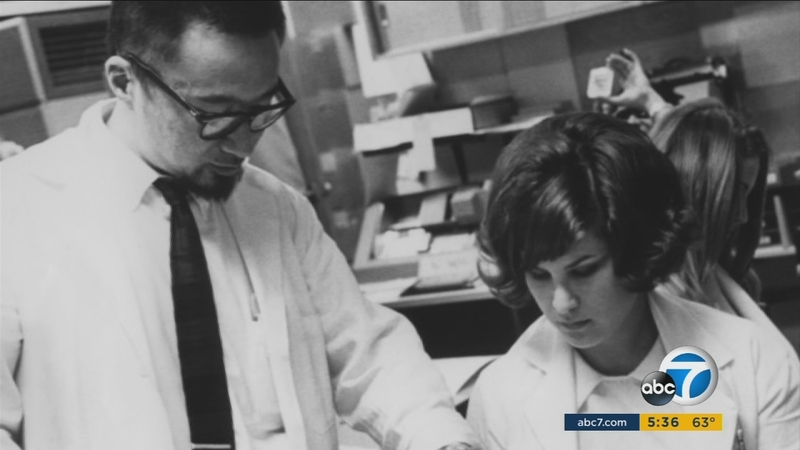 LOS ANGELES (KABC) -- Though his work has saved thousands of lives, few people know the name of Dr. Paul Terasaki.

The UCLA professor survived great hardships as a child to become a pioneer in the field of organ transplant medicine.

It was his research at UCLA in the 1960s that led to the tissue compatibility test, which helped prevent the body from rejecting transplanted organs.

That paved the way for hundreds of thousands of successful transplant operations around the world.

Terasaki was born impoverished in Boyle Heights. As a teenager, he and his Japanese American family lost what little they had when they were held in an internment camp during World War II.

But his resolve led him eventually to earn multiple degrees from UCLA and then land on the school's faculty and begin his transformative research.

He also co-founded a private medical research company and later donated tens of millions of dollars to the UCLA campus. The school's Terasaki Life Sciences Building is named in his honor.

Ironically at the age of 86, Terasaki found himself in need of an organ transplant as his kidneys were failing. His age, he noted, put him at the bottom of the list - no exception just because he was the one who made transplants possible.

When asked in an interview last year if he felt proud when his research began saving lives, Terasaki laughed. "Proud? No. I didn't think much of it because there was so much work to be done."
Related topics:
sciencewestwoodlos angelesorgan donationstransplantuclamedical research
Copyright © 2021 KABC-TV. All Rights Reserved.
TOP STORIES
Video: Fight breaks out on 60 Freeway in Ontario after crash
Jaxson Hayes arrested after altercation with LAPD in Woodland Hills
2 killed, 1 hurt after car slams into tree off Angeles Crest Highway
Las Vegas to mask up indoors again after Nevada adopts COVID-19 rule
Alert system to aid farmworkers working in dangerous conditions
Biden calls on states to offer $100 to those who get vaccinated
20-year-old charged in killing of Rite Aid clerk in Glassell Park
Show More
COVID-19 outbreaks increasing in LA County as cases keep rising
USA's Suni Lee wins all-around gold
Some SoCal residents fed up with mounting Flex Alerts
NWS: No tsunami threat to SoCal beaches after Alaska quake
Bacteria prompt health warning for beaches near Dockweiler, El Segundo
More TOP STORIES News