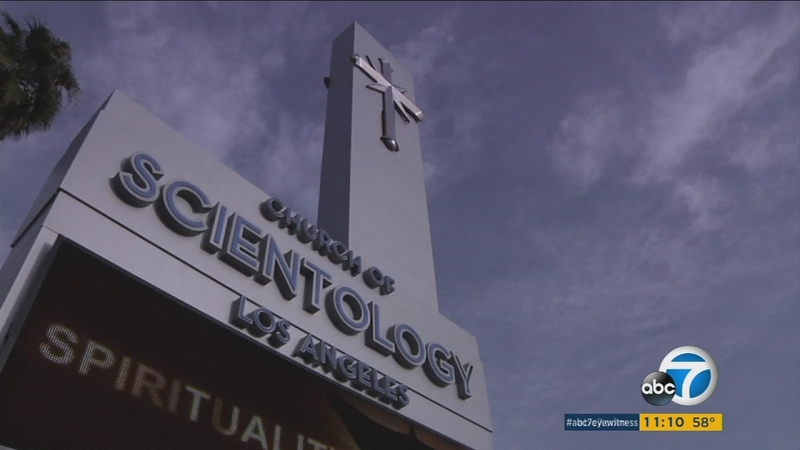 LOS ANGELES (KABC) -- Imagine signing a "Billion Year Contract" when you're barely out of elementary school, and pledging your eternal devotion to a religious order - not just for this lifetime, but for all future lifetimes.

That's what Laura DeCrescenzo did back in 1991. She was twelve years old at the time and that commitment meant she had to move out of her parents' home in New Mexico and into Scientology's "Pac Base" in Hollywood.

A Church of Scientology employment contract, which commits the signer to the SeaOrganization for a billion years.

Laura's parents gave their blessing, despite some concerns. They were both committed Scientologists and encouraged their daughter's faith at a young age. By the time Laura was twelve, she had already volunteered at the Church's Orange County "Org," worked on staff at a New Mexico church, and even joined other Scientologists protesting outside a courthouse in Downtown Los Angeles.

Laura DeCrescenzo's parents joined a Church of Scientology protest outside a Los Angeles courtroom regarding a lawsuit against the church.

Strangely enough, it's at that very same courthouse that Laura is now waging an epic legal battle against the Church of Scientology. In her lawsuit, Laura claims she was falsely imprisoned, isolated from her family at times, subjected to rigid discipline and forced to have an abortion when she became pregnant at age 17.

Attorneys for the Church of Scientology and its Religious Technology Center deny each and every allegation and say it was Laura's decision to abort the baby -- a decision that was influenced by her then-husband who was upset she had stopped taking birth control pills without telling him.

In court documents, Laura says she faced days of intense pressure by her Scientology supervisor to abort the baby. Laura says she was threatened - if she did not have an abortion she would lose her position in the Sea Org, her housing and her husband.

"I was told by the commanding officer of my organization that, she immediately started telling me that at this point the baby wasn't a baby, it was just tissue," Laura said in 2010.

Laura and her attorneys declined our requests for an interview, but she spoke out at a news conference in 2010 in Hollywood alongside other former Scientologists.

Laura says she was "handled" for two days, her supervisor allegedly telling her it was for the "greatest good" to abort the baby. Laura says she eventually gave in, despite her intense longing for a child.

"I never agreed to have an abortion," Laura says. "Did I concede? Yes, I did. Does it kill me every day? Yes, it does."

Journalist Tony Ortega of The Underground Bunker has been reporting on Scientology for two decades, and has followed every twist and turn in Laura's case since it was filed back in 2009.

"Sea Org workers work around the clock," Ortega tells Eyewitness News. "You can't work like that if you have small children to take care of."

Scientology acknowledges that Church policy prohibits active members of the Sea Org from having young children. But, they insist Laura was a religious volunteer who could have walked away at any time. She stayed, they say, without any force or coercion on the Church's part.

"To be clear, defendants do not argue that a church may physically force a woman to have an abortion," wrote Bert Deixler, attorney for the Church of Scientology International, in court papers.

"But that is not the issue here. Under the First Amendment, churches may encourage a minister of a religious order to forego child rearing so she or he may continue a religious life. Courts may not interfere with those efforts," Deixler wrote in court papers.

As part of her lawsuit, Laura says she fell under the powerful sway of the Church for more than a decade. She alleges that because she was "recruited to join" the Sea Org at such a young age, she was unable to see a way out of the only world she had ever known and "remained under Defendants' influence and control for years."

Journalist Tony Ortega says he's spoken to hundreds of former Scientologists who tell him that Sea Org workers are conditioned to believe they can not make it on the outside.

"They're told you'll never get a job, you don't understand how the world works, and they're terrified. They really are terrified about leaving," Ortega tells Eyewitness News.

Scientology declined a request by Eyewitness News for an interview, stating by email that, "the Church does not comment on pending litigation." In court, attorneys for Scientology have argued that Laura became a "minister" at age twelve and the First Amendment's freedom of religion clause shields the Church and its practices from interference by the courts.

"Determination of who is a minister is made by the Church, not a jury," attorney Bert Deixler told L.A. Superior Court Judge John Doyle this week at a hearing in which Scientology attorneys were asking for Laura's lawsuit be dismissed.

Deixler compared the potential trial to a "religious inquisition." Judge Doyle, however, disagreed and denied the Church's motion for summary judgment. Judge Doyle determined there is enough evidence to move forward with a trial and asked both sides to return to court in June to set a trial date. Robert Mangels, attorney for the Church's Religious Technology Center, said he will file papers asking California's Court of Appeal to reverse Doyle's ruling and dismiss the case.

Laura's lawsuit against Scientology has been making its way through the court system since 2009.

"They've already been the U.S. Supreme Court in this case because the Church of Scientology did not want to give Laura her own files. They claimed it would be a violation of priest-penitent privacy," Ortega tells Eyewitness News.

Laura and her attorneys fought for access to what's known as "PC files" - thousands of pages of documents compiled by Scientology during her thirteen years in the Sea Org. Ultimately, the Church turned the files over and many of them were entered into the court record.

In handwritten notes, Laura writes that she "missed my family" and "gets griefy" when she's not able to see or communicate with her family.

Another note, written when Laura was twenty years old, states that she hasn't seen her mom in almost two years.

Scientology also turned over a document written by Laura's supervisor that says Laura is "two months pregnant, upset about it and doesn't want to have an abortion."

In 2001, Laura was sent to the "Rehabilitation Project Force" or RPF for having "committed purported wrongs." Scientology describes the RPF as a "voluntary program of spiritual rehabilitation" that, among other things, includes physical labor as a means of "penance and amends."

Laura did agree to go to the RPF, but she says, only after being mentally "beaten down."

She says her three years in the RPF included punishments like "running around the basement or doing push-ups."

"Was she coerced? Was she held against her will? That's the kind of thing that Laura's side wants to get in front of a jury and let the jury decide - is the RPF a reasonable thing," says Ortega.

Scientology attorneys point out that Laura was an adult when she agreed to go on the RPF as part of their "religious practice," and that she was able to leave, and did leave. They say she returned voluntarily on several occasions.

Scientology attorney Bert Deixler told Judge Doyle this week that Laura's decision to remain in the Sea Org and the RPF was "a matter of faith, not a matter of force."

"She signed a 'billion-year contract' and she didn't fulfill it," Deixler said. "There's no question about that."

Three years later, and still on the RPF, Laura says she was "broken and fearful." She "could no longer tolerate" the RPF. Laura says she took drastic measures, faking a suicide attempt, believing it would result in her immediate dismissal from the RPF and the Sea Org.

"I actually took a gulp of bleach, because I knew that if I was considered a suicide risk, they would get rid of me immediately," DeCrescenzo says.

"And she couldn't take it anymore," says Ortega. "And that's why she drank bleach to pretend she was suicidal because she knew suicide is one thing they don't want to deal with."

Within days, Laura was dismissed from the RPF. Eyewitness News obtained the video Scientology recorded of Laura signing an affidavit releasing Scientology of any liability or wrongdoing. It's a document she now challenges.

Laura says she was "emotional and mentally unstable" at the time, and "would have signed anything in order to be able to leave."

Parents buy billboard to reach children in Church of Scientology

Inside a Scientology marriage - Tanja Castle tells her story