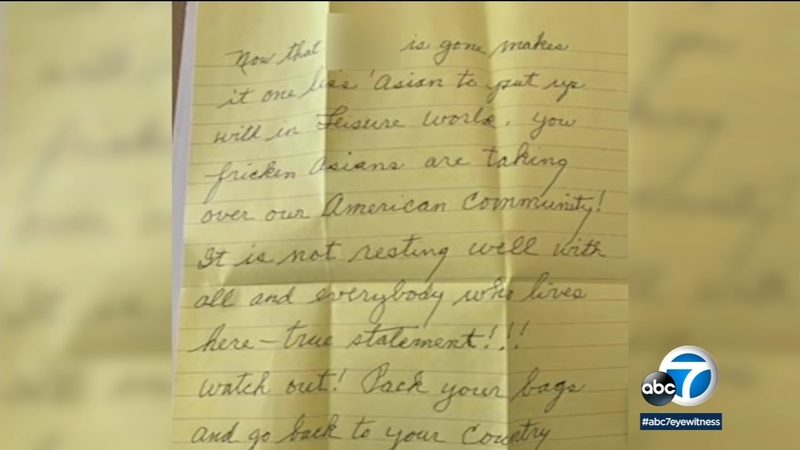 SEAL BEACH (KABC) -- Police in Seal Beach have launched a hate crime investigation into an anonymous racist letter that was sent to an Asian American resident of a local retirement community.

Claudia Choi says the threatening letter was sent to her grieving 82-year-old mother and arrived on the day of her 83-year-old father's funeral, who died in February.

"A hate letter (sent) to my mother telling her that she needed to watch out and she should pack her bags and leave the country because she wasn't welcome in their community anymore," Choi said.

The anonymous writer also made other racist statements in the handwritten letter.

"They said that my dad dying was good because it was one less Asian in the country."

The Korean American couple started successful businesses in their community and raised four daughters, sending them all to college. Nearly ten years ago, they bought a home in the Leisure World retirement community in Seal Beach.

Choi believes another resident of that community wrote the letter.

The Golden Rain Foundation released a statement, saying acts of hate speech will not be tolerated. The foundation says the letter was received on Monday.
The statement reads in part: "This malicious and egregious act of hate speech threatens our core values of racial equity and social justice.

This hateful bias crime, by an anonymous individual believed to be a resident of Leisure World, is under full investigation. Additionally, we are reaching out to our community members to restate that we condemn in the strongest possible terms such action and that all actions will be taken to locate and prosecute the individual."

"My mom and dad proudly voted in every election. They are as American as anybody else and for somebody to come after them and tell them that they are not welcome in this country is disgusting," she added.

The letter comes as vigils and protests are held across Southern California to denounce the surge in hatred and violent attacks against Asian Americans.

"I'm sad. I'm sad that this has reared its ugly head again."

The Seal Beach Police Department says it is working to identify the author of the letter, using investigative tools such as DNA, fingerprint and handwriting analysis and surveillance video.

"Hate directed toward any member of our community is disgusting and will not be tolerated," Police Chief Philip L. Gonshak said in a press release. "Across the county we are seeing more and more violence committed against Asian Americans and Pacific Islanders. We will not allow this to happen in Seal Beach."