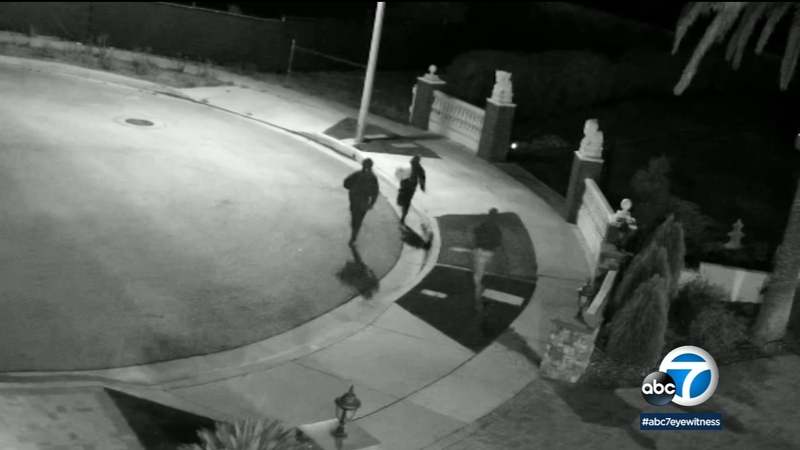 At a news conference Friday morning, detectives urged the public to help them find the two accomplices of 28-year old Jeffery Taylor-Thompson of Highland, who was arrested following a home invasion robbery in Rancho Cucamonga last month. One of the victims was Mike Hafez, who appeared at the news conference.

"My 10-year-old can't go anywhere in the house alone," said Hafez, whose entire family was pepper-sprayed and tied up on Oct. 3 at a home on the 6700 block of Di Carlo Place in Rancho Cucamonga.

"My daughter hasn't slept in her room since that incident," added Hafez.

Detectives say Taylor-Thompson was arrested in Nevada during an unrelated traffic stop. They say a search warrant at his home revealed information connecting him to not only the Rancho Cucamonga home invasion, but attacks in San Jacinto on Sept. 20 and Yucca Valley on Oct. 1.

In the San Jacinto home invasion robbery a woman was attacked in her front yard, and then tied up while the robbers ransacked the home for nearly an hour. In the Yucca Valley robbery, a 79-year-old Vietnam veteran was attacked, and his wedding ring forced from his finger.

"These guys are extremely dangerous," said San Bernardino County Sheriff's detective Donald Patton, who says it's possible the robbers have attacked people inside homes all across Southern California.

"These guys have not targeted specific residences in certain cities," said Patton. "They're targeting whatever opportunity they have, wherever they are at the time."

Detectives have arrested Dennis Charles Franks of Highland in connection to a home-invasion robbery on the 13000 block of Carnesi Drive in Rancho Cucamonga, but say he's not connected to the other three robberies.

Hafez says the night of Oct. 3 was the most horrifying in his life. He asks the public to support detectives in their efforts to find the remaining two robbers who are still at large.