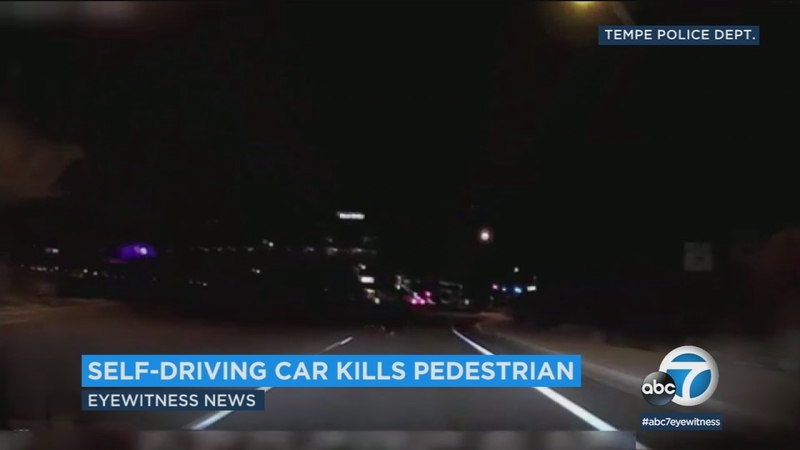 TEMPE, Ariz. (KABC) -- Police in Tempe, Arizona have released some of the video from a fatal crash involving a self-driving Uber vehicle and a pedestrian.

The video shows the viewpoint from inside the vehicle looking forward to the road.

A pedestrian walking a bicycle across the road suddenly comes into view and the vehicle doesn't stop in time.

The video segment that was released does not show the moment of impact because of its graphic nature.

The video also shows the interior view of the vehicle with a human backup driver who is glancing down and occasionally looking up as the vehicle is operating itself. Suddenly, the driver's eyes open wide in shock and the video ends.

The crash Sunday night in Tempe was the first death involving a full autonomous test vehicle.

The Volvo was in self-driving mode with a human backup driver at the wheel when it struck 49-year-old Elaine Herzberg as she was walking a bicycle outside the lines of a crosswalk in Tempe, police said.

Uber immediately suspended all road-testing of such autos in the Phoenix area, Pittsburgh, San Francisco and Toronto. The ride-sharing company has been testing self-driving vehicles for months as it competes with other technology companies and automakers like Ford and General Motors.

Tempe police Sgt. Ronald Elcock said local authorities haven't determined fault but urged people to use crosswalks. He told reporters at a news conference Monday the Uber vehicle was traveling around 40 mph when it hit Helzberg immediately as she stepped on to the street.

Neither she nor the backup driver showed signs of impairment, he said.

"The pedestrian was outside of the crosswalk, so it was midblock," Elcock said. "And as soon as she walked into the lane of traffic, she was struck by the vehicle."

The National Transportation Safety Board, which makes recommendations for preventing crashes, and the National Highway Traffic Safety Administration, which can enact regulations, sent investigators.

Uber CEO Dara Khosrowshahi expressed condolences on his Twitter account and said the company is cooperating with investigators.

The collision is expected to bring calls for tighter regulations on the self-driving car industry.

Proponents of light regulations, including the Trump administration's Transportation Department, say the technology could reduce the 40,000 traffic deaths that happen annually in the U.S. The government says 94 percent of crashes are caused by human error that automated systems can reduce because they don't get drunk, sleepy or inattentive.