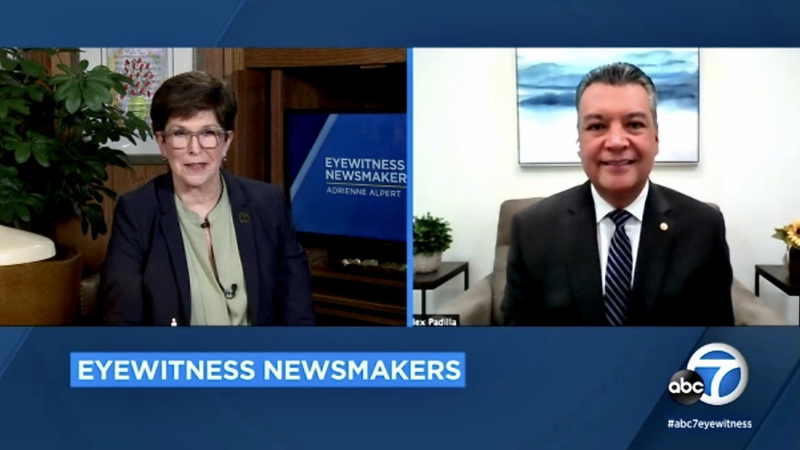 Access to vaccines is a critical focus for newly sworn-in United States Senator Alex Padilla, who was this week's guest on Eyewitness Newsmakers.

Padilla says there is misinformation circulating that the mass vaccination site at Cal State Los Angeles is closing. It is not. The site had been federally-run, but now the city of L.A. will lead the continued operation.

"No, the site is not closing. It was quickly propped up under a federal government leadership, in partnership with state and local governments for a period of eight weeks," the senator said. "That was the initial agreement and while the time is running on that initial agreement, agreements are put in place to keep that location open as a vaccine site."

Padilla also discussed gun violence in the wake of recent shooting in places like Boulder and Colorado.

"I'm supportive of President Biden's actions on the executive order, but it is not enough," he said. "There's much more work to be done to rein in gun violence in America, whether its strengthening background checks, whether it's reinstating the national assault weapons ban... closing a lot of loop holes."

He predicts it may take an end of the filibuster to pass tougher gun regulations.

"Those sacrificing and serving so that others can stay safer at home, to keep the economy moving. In my opinion, they have absolutely earned, not just the opportunity for more stability and security in their lives, but a pathway to citizenship for more than five million undocumented immigrants working as federally recognized essential workers, more than a million of them here in California alone," he said.

When it comes to housing, California is short by about 1.5 million affordable housing units. Padilla announced over $667 million in federal funding through the American Rescue Plan for low and very low-income families.

"We know that the housing un-affordability crisis in California is a reflection of supply and demand. So, we hope that this helps advance a lot of affordable housing projects throughout the states to help address that," he said.

Watch the video above for the full interview with Padilla.