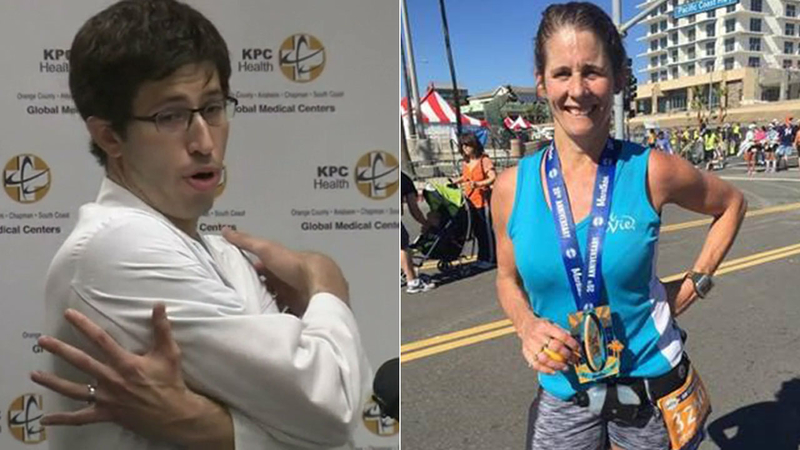 SANTA ANA, Calif. (KABC) -- The woman attacked by a shark off the coast of Newport Beach was identified Tuesday as Maria Korcsmaros, a 52-year-old fitness trainer and mother of three who was training for a competition when she was attacked.

Surgeons at Orange County Global Medical Center, where Korcsmaros was rushed after the attack Sunday, described her wounds as extensive, stretching from the top of her shoulder all down her torso and arm to the pelvis. They say the wounds came from a single large shark bite.

The Corona resident underwent surgery for several hours to repair damage to internal organs and muscles, broken ribs and extensive lacerations to her right arm. Doctors said they could see a clear circular pattern on her body and distinct teeth marks.

In light of the amount of significant damage, she was described as doing "remarkably well at this point."

"Remarkably right now her nerves are all functioning," said Dr. Philip Rotter, director of orthopedic surgery at the medical center. "I was pretty surprised to see that, especially given where the wound is."

"There are actually teeth marks down the back of her bone in her arm."

The doctors also said her level of physical fitness help save her life, allowing her to tread water after the attack until she was rescued.

The doctors said it was too early to say how long she would need to remain hospitalized, noting she may need to return to the operating room for additional cleaning of her wounds.

It's also too early to say if she will regain full use of her arm.

Korcsmaros, a physical fitness trainer and triathlete, has three children, ares 16, 22 and 24.

She was swimming in the ocean about a mile and a half from the beach to train for an Ironman competition scheduled for July 10 in Canada.