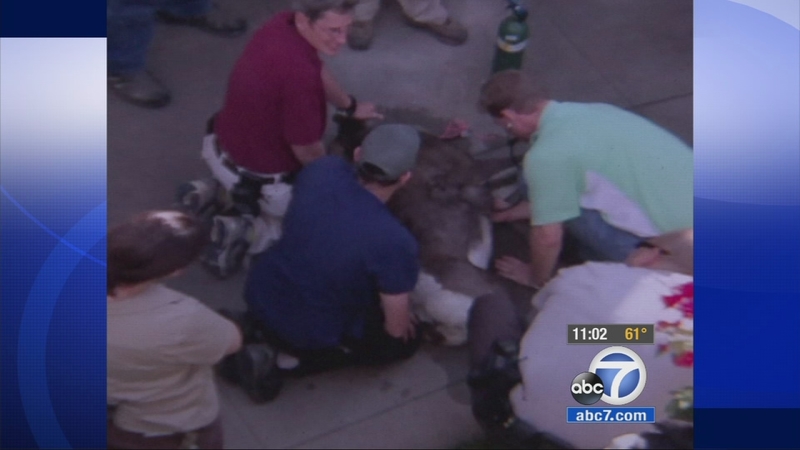 LOS FELIZ, LOS ANGELES (KABC) -- A bighorn sheep escaped from the Los Angeles Zoo on Saturday and died shortly after being tranquilized in a Loz Feliz neighborhood.

The escape was reported at about noon. Officials said the animal jumped over its enclosure wall and then an 8-feet perimeter fence with barbed wife, before taking off into Griffith Park.

About 15 minutes later, Los Angeles police said the female sheep was located and contained in the 2200 block of North Commonwealth Avenue in Los Feliz.

"My neighbor and I corralled it back into the driveway and flagged down a cop," Tom Bruttig said.

The sheep was tranquilized and died shortly after, despite CPR efforts.

"We set up a perimeter around the animal. The veterinarians darted the animal to anesthetize it, but it almost immediately passed away," said John Lewis, director of the Los Angeles Zoo.

"The cause is she may have been injured, because typically that wouldn't have happened," Lewis added.

Witnesses said the sheep had been struck and killed by a driver who may have fled the scene. Zoo officials said they are still trying to confirm that information. There were no obvious signs of the animal being hit by a car.

An examination of the animal is expected to be conducted to determine a cause of death. Officials were still unsure how the animal was able to escape from the zoo.