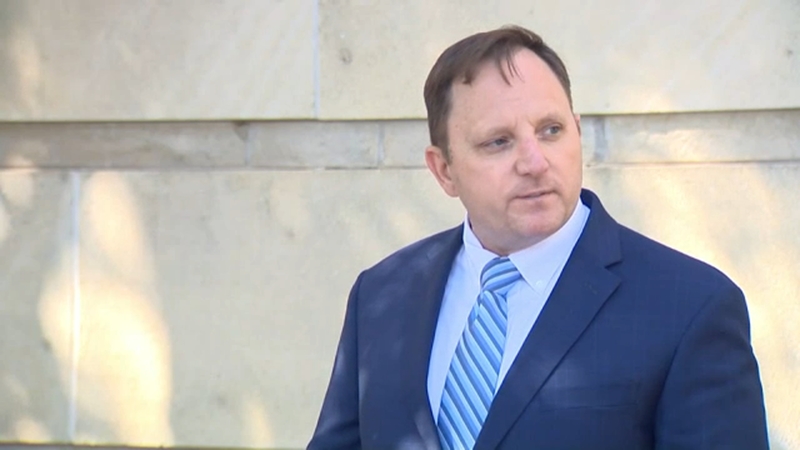 AUSTIN, Texas -- A grand jury on Monday indicted a Texas sheriff on charges accusing him of destroying or concealing video in an investigation into the death in custody of a Black man, Javier Ambler, that was filmed by a police reality TV series "Live PD."

Williamson County records show Sheriff Robert Chody is facing the third-degree felony charge that is punishable by up to 10 years in prison. He was booked into his jail Monday on a $10,000 bond.

In June, Williamson County prosecutors announced an investigation "involving possible tampering with evidence" following the 40-year-old Ambler's death in March 2019. Ambler died after Williamson County sheriff's deputies repeatedly used stun guns on him, despite his pleas that he was sick and couldn't breathe.

Travis County prosecutors are separately investigating the use of force in Ambler's death.

Court records show Chody was indicted on charges that as an investigation into Ambler's death was underway, the sheriff did "destroy or conceal" recordings "with intent to impair their ability as evidence in the investigation." Prosecutors could not immediately be reached for comment but they scheduled a Monday afternoon news conference.

Chody, who is running for reelection in November, scheduled his own news conference later Monday. His booking photo posted by the jail showed Chody smiling in a suit, standing in front of the Williamson County Sheriff's Office logo.

Williamson County deputies attempted to pull Ambler over on March 28, 2019, near downtown Austin because he failed to dim his headlights to oncoming traffic, according to a report first published by the Austin American-Statesman and KVUE-TV. The deputies were being filmed for A&E Network's real-time police show "Live PD," a feature of the arrest that prosecutors said was particularly troubling.

Police body camera video of Ambler's death shows the gasping 400-pound (180-kilogram) man telling the deputies that he wants to comply with their demands but that he can't because he has congestive heart failure.

Investigators with the Williamson County sheriff's department of internal affairs determined that the deputies didn't violate pursuit or use-of-force policies. Their report doesn't indicate whether the deputies were disciplined or forced to take leave.

A&E has said its video never aired because of a policy against showing a death, and it did not keep the footage after it was informed that the initial investigation had closed. A&E said neither the network nor the show's producers "were asked for the footage or an interview by investigators from law enforcement or the District Attorney's office."

WATCH: Austin PD breaks down moments leading up to the shooting death of Mike Ramos, including a 911 call, police discussion of strategy and the moment shots were fired.