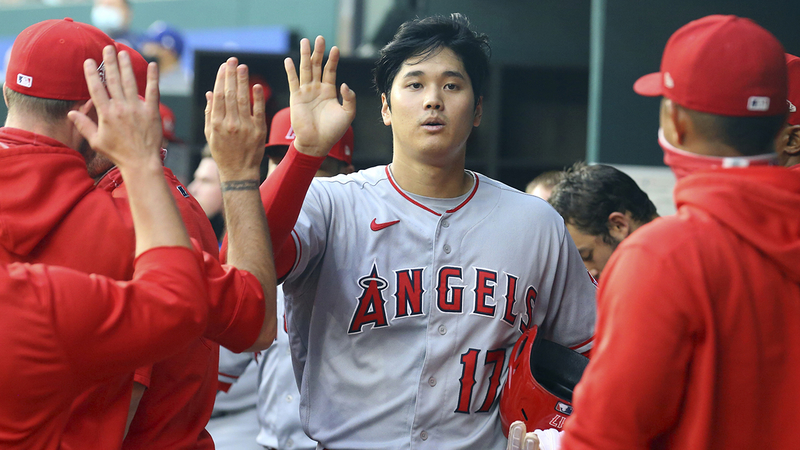 Ohtani claimed all 30 first-place votes from the Baseball Writers' Association of America and became the fifth unanimous MVP since 2000, joining Mike Trout (2014), Albert Pujols (2009), Barry Bonds (2002) and Bryce Harper, who won unanimously in 2015 and was named the the National League MVP on Thursday.

Vladimir Guerrero Jr., the young star for the Toronto Blue Jays, captured 29 of the 30 second-place votes by the BBWAA, with the remaining vote going to Salvador Perez of the Kansas City Royals. Guerrero's teammate Marcus Semien, the third finalist, received 24 third-place votes.

Ohtani fulfilled his promise as a two-way star and somehow exceeded the outsized expectations he carried with him from Japan four years earlier. He became the first player in baseball history to hit at least 30 home runs in a year when he also made at least 10 pitching appearances -- and that doesn't come close to capturing his wide-ranging excellence.

Ohtani, 27, amassed 46 home runs and made 23 starts for an otherwise lowly Angels team. Offensively, he posted a .965 OPS (second-highest in the AL), added eight triples (tied for the major league lead) and stole 26 bases (a mark topped by only seven players). He became the sixth player in history with at least 45 homers and at least 25 stolen bases in the same season, joining a decorated list of names that includes Alfonso Soriano, Chipper Jones, Jose Canseco, Larry Walker and Barry Bonds.

Ohtani, who gave up a promising career in Japan early to become a two-way player at his sport's highest level, showed glimpses of his potential early in his first season in the United States. Through his first two months of 2018, he posted a 3.18 ERA on the mound and a .929 OPS in the batter's box. But he suffered a sprain of his ulnar collateral ligament in his first June start and made only one more pitching appearance the rest of the year.
Tommy John surgery was recommended in late September, prompting Ohtani to spend most of the next 15 months rehabbing his right elbow. Ohtani proved to be a formidable offensive weapon in the meantime -- batting .286/.351/.532 with 40 home runs in a combined 210 games from 2018 to 2019 -- but shouldered widespread doubt over whether he could become baseball's first two-way star since a young Babe Ruth briefly juggled hitting and pitching in the early 1900s.

An aggressive offseason followed. Ohtani altered his diet, sought counsel from third-party facilities, got into more game-like situations as both a pitcher and a hitter, and showed up to spring training in 2021 looking like a completely different player. His fastballs breezed into the upper 90s, his batted balls frequently cleared the center-field batter's eye, and in the midst of that, Angels manager Joe Maddon decided to let Ohtani dictate the terms of his season. He lifted prior restrictions, allowing Ohtani to hit the day before, the day after and, most notably, the day of his starts. On some nights, he even moved Ohtani from the mound and into the outfield in order to keep his bat in the lineup.

In July, Ohtani competed in the Home Run Derby, then led off the All-Star Game as both a pitcher and a hitter. In October, Major League Baseball commissioner Rob Manfred gifted him with the Commissioner's Historic Achievement Award meant to "recognize accomplishments and contributions of historical significance to the game," according to an MLB release. Throughout, Ohtani captivated audiences with his unprecedented combination of power, speed and pitching prowess. His fastball was electric, but his splitter was devastating. He hit 500-foot moonshots, but he also legged out routine grounders.

Fans lined up outside the Angel Stadium gates for his giveaways, people all over the world tuned in on his start days and the most respected people in his sport -- players, coaches, executives -- were left stunned by his overwhelming talent.