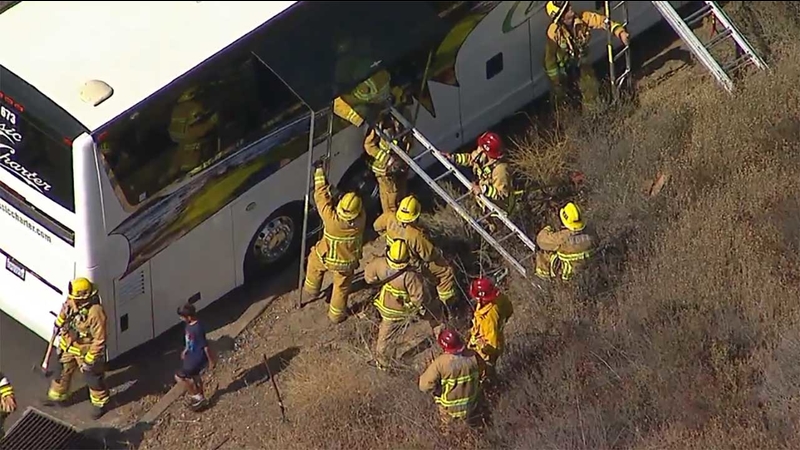 SIMI VALLEY, Calif. (KABC) -- A charter bus carrying schoolchildren on a field trip to the Reagan library crashed Tuesday morning on the 118 Freeway in Simi Valley, injuring five people and tying up traffic for hours.

Officials described the injuries as moderate. Four people were transported to a local hospital for treatment while a fifth person declined transported.

The crash happened shortly after 9 a.m. near Madera Road on the westbound 118, the Ventura County Fire Department said, adding that the students were on a field trip en route to the nearby Ronald Reagan Presidential Library.

Besides the bus, three other vehicles were involved in the collision. There were 43 people in the four vehicles, including the 33 minors and seven adults on the bus, investigators said. The 5th grade students were from Horizon Elementary School in Bakersfield.

The ages of the injured victims were not immediately known.

The crash left the bus jammed against the hillside, with no way for the students to exit through the door.

The Fire Department's Urban Search and Rescue team used struts and wood cribbing blocks to shore up the unstable bus. Other firefighters perched a ladder against the side window to slowly help the children and adults disembark.

The cause of the pileup was under investigation.


The westbound lanes of the 118 Freeway reopened around noon.