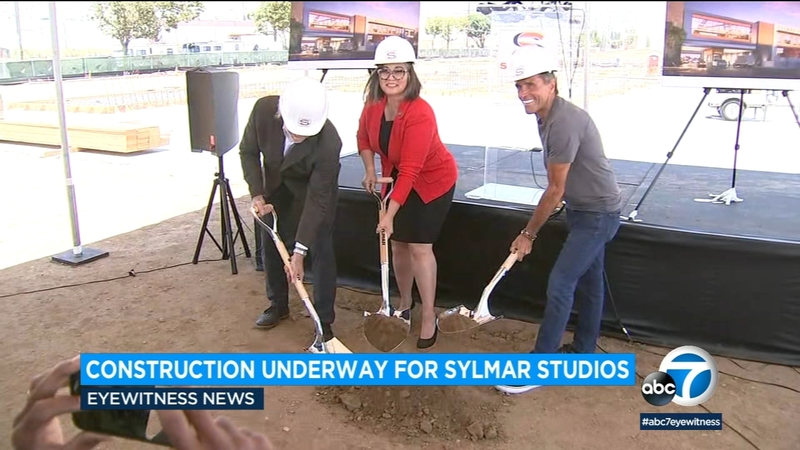 SYLMAR, Calif. (CNS) -- With demand for sound stages at a premium as production companies push out content for new digital platforms, ground was broken Monday on the first phase of Sylmar Studios, a 300,000-square-foot, 12-stage facility that's expected to open next year.

Los Angeles City Councilwoman Monica Rodriguez, in whose district the new facility will rise, was on hand for Monday's groundbreaking, along with Sylmar Studios CEO Tony Guanci and Executive Vice President Scott Hodgkins.

Officials said the $500 million project -- believed to be the first of its size to be built privately in Southern California in decades -- will also feature 120,000 square feet of office space, including post-production and support facilities.

When it's completed, the initial phase of the development will cover 27 acres of the Sylmar site, located on San Fernando Road, studio officials said.

"We are designing Sylmar Studios to be one of the most technologically advanced production facilities in the world, ensuring that Southern California film and television productions and the jobs that come with it stay in our state for years to come,'' said Guanci. "Councilwoman Rodriguez's efforts to help clear the way for this project in her district have been invaluable. Sylmar Studios will be hugely positive for the local creative community and for the thousands of jobs that this new facility will help to support in Sylmar, which is primed to thrive.''

Rodriguez said the new studios will provide a needed boost to the area's economy.

"The Northeast San Fernando Valley has historically trailed in quality economic opportunities, and since taking office I have been working to bring new industries and jobs into our area,'' she said. "Sylmar Studios, a state-of-the-art film and television production facility, will provide a major economic impact to drive the local economy and create a space for local production for television and film.''

Demand for sound stages is on the rise, with existing stages largely booked year-round -- and the Sylmar Studios project is one of several efforts begun in the past year to address the need.

In February 2021, the owners of CBS Television City announced a $1.25 billion expansion and improvement of the historic production facility -- growing the number of sound stages to a minimum of 15, up from eight, as well as adding new production office space and support facilities.

In October 2021, it was announced that Warner Bros.' historic Ranch Lot will be redeveloped to include 16 sound stages in what the new owners said will be the largest studio development in the U.S.

Warner Bros. sold the lot to Worthe Real Estate Group, which is developing the sound stages, along with a connected production support space, a multi-level parking structure, a commissary, mill space and a 320,000-square-foot office complex. Warner Bros. will lease back the property starting in 2025.

With the addition of 16 new sound stages, the Burbank facility will offer 56 sound stages to support WarnerMedia's production activity in Los Angeles, once it takes occupancy of the Ranch in 2025.