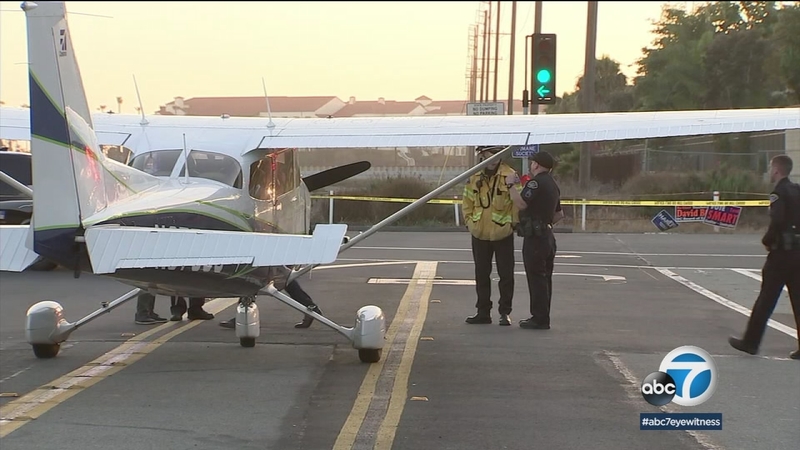 HUNTINGTON BEACH, Calif. (KABC) -- The pilot of a small aircraft made an emergency landing in the middle of a street in Huntington Beach Friday, causing a bit of a spectacle for residents in the area.

Reports of a plane down came around 5 p.m. and authorities discovered the single-engine Cessna 172 plane landed safely on a street near Hamilton Avenue and Magnolia Street.

The aircraft landed about 5 miles southwest of John Wayne Airport. Authorities said the pilot had just taken off from the airport.

A single-engine Cessna 172 is shown in the middle of a street in Huntington Beach after the pilot made an emergency landing on Friday, June 1, 2018.

An official with the Federal Aviation Administration said the pilot of the plane made an emergency landing for after her engine had lost power mid-air. She made the call to land on the street and ended up at the intersection.

The pilot was the only person on board and was not injured.

Witnesses took photos of the plane settled in the middle of the road as they drove by or stopped to watch authorities look over the scene.

"This could have been really, really bad," witness Tory "TJ" Johnson said. "Flew underneath all those wires, which is a pretty big deal. Those wires hang down pretty low and could have killed the power throughout this entire block. It was pretty gnarly."

The FAA is investigating the emergency landing.

The plane was eventually moved and will be taken apart for assessment as officials try to figure out what happened.
Report a correction or typo
Related topics:
huntington beachorange countyairport newsemergency landingairplanetraffic delay
Copyright © 2021 KABC-TV. All Rights Reserved.
More Videos
From CNN Newsource affiliates
TOP STORIES