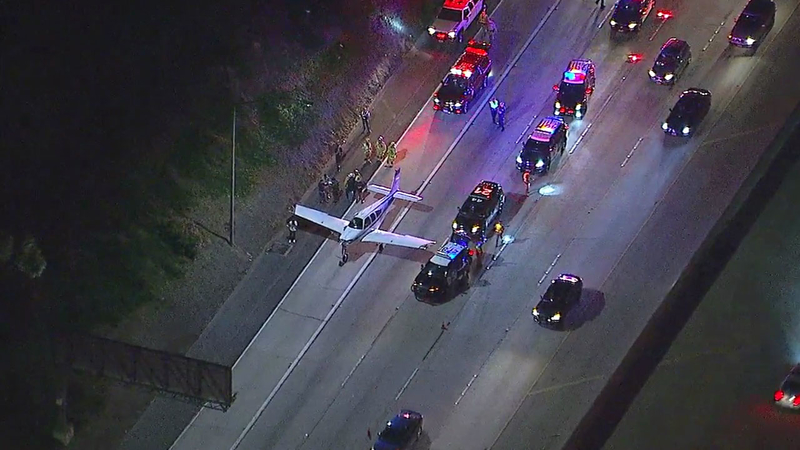 COSTA MESA, Calif. (KABC) -- A small plane landed in the lanes of the northbound 55 Freeway in Costa Mesa Sunday night after the pilot reported engine trouble.

The landing happened around 7:30 p.m. after the pilot of a single-engine Beech G33 aircraft bound for John Wayne Airport reported a problem.

The plane landed smoothly on the freeway, just south of the Del Mar Avenue offramp, according to the California Highway Patrol.

Gross's friend, Israel Slod, piloted the plane. They were over the ocean flying back from San Diego when the engine lost power.

"The choice was between landing at John Wayne or landing on the beach. We tried to make it to John Wayne, and we couldn't make it. So, I saw an opening on the highway and I went for it right away," Slod said.

Gross said it all happened in less than two minutes.

"We had about a minute and a half from when we lost power to when we were on the ground. It happened really quickly. You don't think about that when you're falling from the sky," Gross said.

Witness Allison Martin captured an image of a small plane in the northbound lanes of the 55 Freeway in Costa Mesa after it made an emergency landing on Sunday, Jan. 28, 2018.

Slod, who Gross said has been flying for about seven years, landed without striking any vehicles and neither he nor Gross were injured.

"Typically on a Sunday night, you have a lot of traffic coming from the beach, going back home. It was very fortunate that he didn't hit any vehicles or cause any injuries," said Florentino Olivera with the CHP.

Gross said he was still in a little shock.

"It's crazy. I mean we landed in the middle of the freeway. I don't want to do that ever again," he said.

The small aircraft was towed to the nearby Orange County Fairgrounds around 11 p.m. Slod said the wings would probably be removed in preparation for the plane's transport to Van Nuys Airport, where it is based, on a flatbed truck.