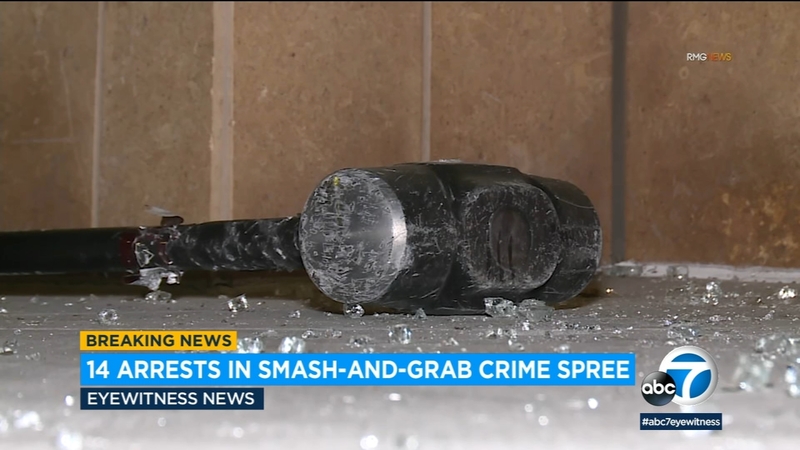 Police say there were at least 11 such robberies around Los Angeles in the week leading up to Thanksgiving, resulting in the theft of some $338,000 in retail goods.

Many of them involved flash mobs who swoop in quickly to a retail store, like Nordstrom at the Grove, smash glass cases and grab as many items as they can before fleeing.

The 14 arrests were linked to five such incidents. Three arrests resulted after a long, high-speed chase in which officers caught the suspects with car full of stolen merchandise.

Police acknowledged that after the arrests, all 14 suspects are now free again, under no-and-low bail policies that have been enacted in Los Angeles County recently. At least one suspect was a juvenile.

Religious and community leaders gathered in Compton to condemn recent smash-and-grab robberies seen at malls and stores in Southern California.

Most of the merchandise was being resold after the thefts and police are also trying to follow that investigative trail.

In addition to a rash of smash-and-grab robberies, police are also seeing an increase in violent follow-home robberies, in which victims wearing expensive jewelry or making big purchases are followed home and sometimes violently assaulted and robbed.

Police urge the public to take precautions, including remaining aware of your surroundings and not always staring at the phone.

Police are also stepping up patrols in retail areas during the holiday shopping season.

"A rash of these smash-and-grab type crimes have placed community members and store employees in significant danger, due to the violence that's associated with them," said LAPD Chief Michel Moore.

In other parts of L.A. County, a recent video going viral that is now the subject of a sheriff's department investigation shows a group of people with hammers targeting a jewelry booth at the Del Amo swap meet in Rancho Dominguez. Two people were detained and several others got away as the Carson sheriff's station tries to track them down.