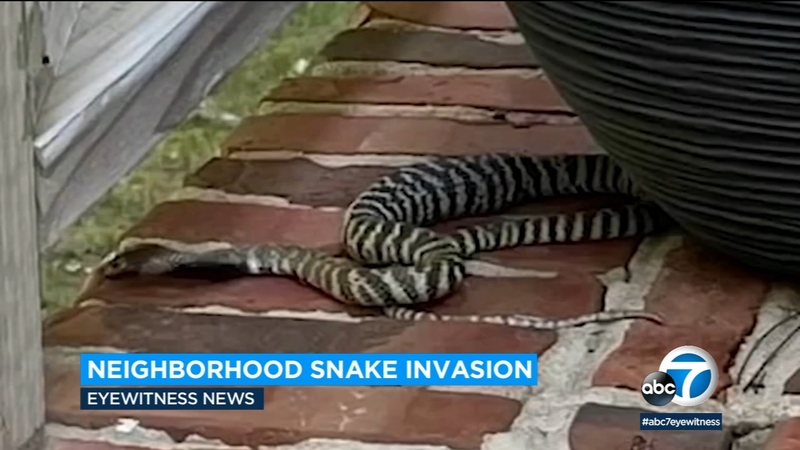 LOS ANGELES (KABC) -- If you've had a terrifying run in with a slithery serpent you're not alone. There's a snake invasion in some Southern California communities.

Snakes, like other wildlife, are starving during this drought and they're coming into neighborhoods looking for a meal and water.

Eyewitness News reporter Leo Stallworth happened to come across a snake underneath his foot at a park Sunday, an experience which left him petrified.

Snake expert Patrick Bockman says this year he has had more snake calls inside homes, garages, backyards than any previous year.

Bockman went to a customer's home Monday morning looking to corral a snake. He says the client had rattlesnakes inside her home before, and she found a piece of what she thought was snake skin, so she had him look underneath the cabinets in her kitchen and underneath all of the couches.

Bockman didn't find a snake in the home. He says as the drought persists more and more frantic customers are calling his wildlife removal business in Van Nuys.

Helaina Alati was browsing the spice aisle of an Australian supermarket when she came face-to-face with a huge snake.

He says many of the homes attracting wildlife like snakes have a readily available water source.

Bockman says a lot of the homes have pools that the snakes were using in order to get some kind of hydration.
Bockman says from the high desert to the San Fernando Valley, snakes like other wild animals are coming out of their natural habitat looking for sustenance. He says given it's snake season the drought only makes it worse.

He's warning people if you are going to go outside between April and October, watch your step.


Wildlife expert Jennifer Brent says snakes don't want to bite you. They want you to leave them alone.

Bockman adds snakes will stand their ground and bite if you get anywhere near them.

He adds if you spot a snake, slowly back up, and if you are out with your pet, keep it on a leash unless it's trained to stay clear of snakes.