2 people, 2 dogs rescued after being trapped in snow for 14 days near Castaic 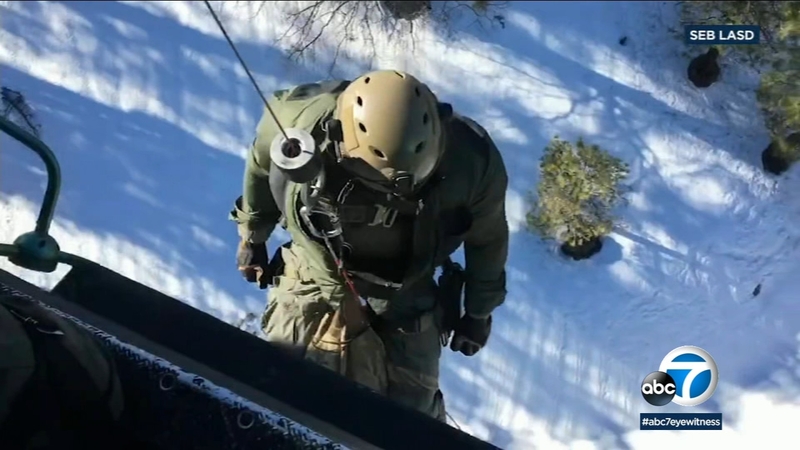 Campers rescued after 14 days snowed in near Castaic

CASTAIC, Calif. (KABC) -- Two campers and two dogs were rescued from the mountains northwest of Castaic after being snowed in their vehicle for 14 days, officials said.

The Los Angeles County Sheriff's Department Special Enforcement Bureau helicoptered in a rescue crew and medics to assist the man and woman, as well as their two dogs.

They were hoisted out and flown to safety.

Campers just rescued after snowed in their vehicle for 14 days, Alamo Mountain,n/w of Castaic. #LASD Air Rescue 5 inserted SEB Tactical Medics to rescue campers, who had run out of food & water. A man, a woman & their two dogs were hoisted out & flown to safety. @SCVSHERIFF pic.twitter.com/XoMMpGALQz

They had been out on Alamo Mountain for two weeks and had run out of food and water, deputies said.

"They had initially headed out for a camping trip," said Charles Miranda with the LASD. "They weren't expecting the snows to come in and they got stuck - a downed tree on one side of the truck and a couple feet of snow on the other."

Eventually they were able to hike to the top of a hill and get cellphone reception to call for help. The sheriff's SEB was able to follow their tracks and footprints and eventually found their vehicle on the mountain. The two were out of food and fuel, but otherwise uninjured and did not need medical attention.