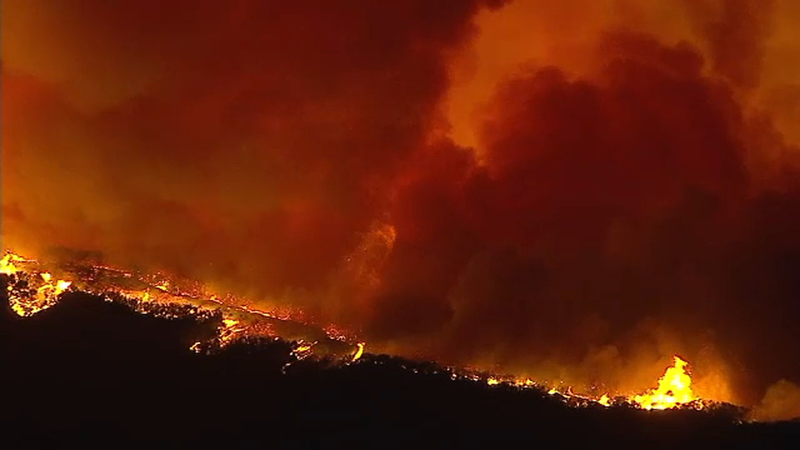 The cities of Ventura and Malibu announced Wednesday settlements with Southern California Edison to settle lawsuits over the destructive and deadly Thomas and Woolsey fires sparked by its equipment during the last two years.

In total, the utility has agreed to pay a total of $360 million to reimburse counties, cities and other public agencies for firefighting costs and repairing damage from two of the worst blazes in the region's history. The figure will not fully repay taxpayer costs, but it will help pay the bills to rebuild roads, other infrastructure and clean up debris, among other things.

The city of Malibu reached a $13.7 million settle with SCE for damages sustained during the Woolsey Fire which ripped through the city one year ago.

The claimed damages include lost property, community assets and more for a group of 23 public entities. However, the settlement does not address claims made by residents, individuals or businesses affected by the fire.

"Malibu experienced one of the worst disasters in the City's history and suffered millions of dollars in taxpayer losses from the Woolsey Fire," said Mayor Karen Farrer in a statement. "This settlement will help the City continue to provide services to the community and keep moving forward with our recovery."

The Woolsey Fire started with the company's equipment a year ago just outside Los Angeles and quickly spread to the coast, jumping a highway and crossing the Santa Monica Mountains into Malibu. It destroyed more than 1,600 structures - mostly homes - and killed three people.

Meanwhile, the city of Ventura reached a settlement of $8 million, also part of a larger group settlement for claims made following the 2017 Thomas Fire and subsequent deadly flooding and mudslides.

The Thomas Fire that broke out in dry brush in Ventura County was sparked when the utility's power lines slapped together in high winds on Dec. 4, 2017. Two people were killed and 440 square miles were burned.

The area that was hit included a mountainside above the seaside city of Montecito, where a deluge a month later on fire-scarred terrain triggered a devastating mudslide that killed at least 21 people. Two people remain missing.

That settlement also does not include claims made residents, individuals and businesses.

SoCal Edison issued the following statement, which reads in part: "Edison's thoughts remain with the communities across the state that have suffered losses due to wildfire. The safety of the public, customers, communities and employees is the company's first and highest priority."

Settlement funds were expected to be paid next month. Thousand Oaks, Santa Barbara and L.A. County will also be paid in the settlement.

The overall figure is dwarfed by the $1 billion settlement Pacific Gas & Electric reached with local governments in Northern California for fires its equipment caused in recent years. The damage from those fires, however, was much greater with more than 20,000 homes destroyed.