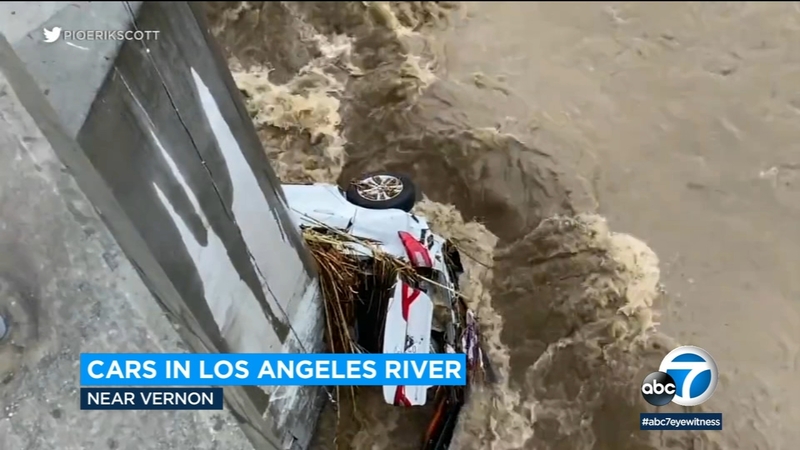 3 cars swept away by LA River

At least one driver was able to free himself, and there were no initial reports of injuries, but firefighters were not able to immediately reach the vehicles and check inside for occupants because of the powerful currents.

The first vehicle was first reported just after 6 a.m. near the river and Main Street, firefighters say. They located it pinned in the water against the Washington Boulevard bridge just south of downtown.

Your @LAFD has been nonstop this morning due to the #LARain. Our #SwiftWaterRescue teams have been bouncing from Incident to Incident. Captain Clark explains what’s actively going on near the Washington Street bridge & the #LARiver. pic.twitter.com/WoaieDFEgr

As they were observing the car and working on rescue plans, a second car came floating down the river and ended up stacked on top of the first.

Firefighters said they were unable to climb down and examine the vehicles closely because of the surging water posing a risk to rescue crews. They said there was no initial indication that anyone was stuck inside.

One of the vehicles was believed to be a Trans Am and another was a Toyota Camry.

One person, believed to be the Trans Am driver, freed himself before they arrived, and crews were able to rescue him from a pylon under a bridge near Boyle Heights. As they were on scene, a third vehicle also was swept up in the water and flowed south down the river.

Rescue helicopters spotted the vehicle fully submerged in the Compton area and continuing to move south.

Rescue crews were also shutting down overpasses from Compton to Long Beach to help them in their rescue efforts as the car continued to move south.