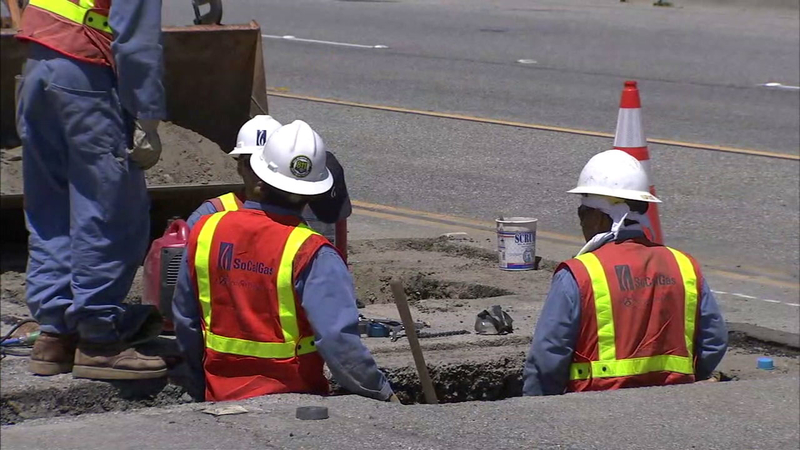 RANCHO CUCAMONGA, Calif. (KABC) -- For more than 10 days, residents of a Rancho Cucamonga neighborhood have been dealing with a natural gas leak that killed their trees and bushes - and then the cleanup aftermath creating a huge nuisance day and night.

Residents first realized something was wrong when they noticed bushes and trees dying.

Trudy Usatorres said she had a beautiful old lemon tree in her yard that just died.

At first, residents thought perhaps it was a lack of water. But a contractor noticed the soil was turning gray, and said it seemed like a gas leak.

SoCal Gas was called in and found the leak and fixed it.

But the natural gas that had already leaked for an unknown length of time remained in the ground.

The company set up noisy air radiators to pump out the natural gas.

After 11 days, neighbors say the work has truly become a nuisance, and the company can't tell them when it is expected to end.

"On Mother's Day, two of the gentlemen were checking the levels around my foundation again, came back here and it read 100 percent gas, after they'd been extracting for six or seven days," Usatorres said.

Besides the nuisance, residents remain worried about their safety.

"When you think gas, you think fire, you think explosion, you think death, you think small children, animals," said neighbor Judy Newsome. "If they would have just come out in the beginning, and said this is what's going on, we're going to take care of it, don't worry we've got your back. Instead they wait until we get angry and frustrated."

SoCal Gas said the area is safe but the company does not know how long the work will take.